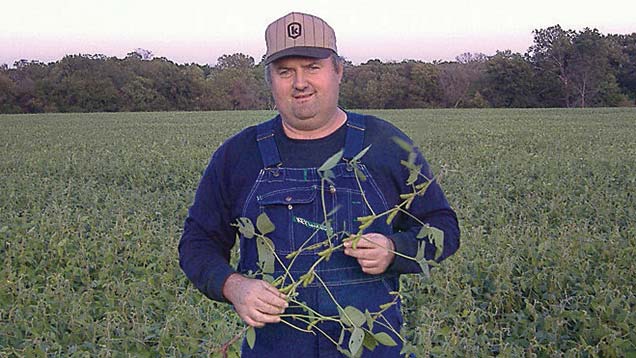 Over 38cm of rain has fallen on my farm since the last time I wrote, so the drought is over.

Very little fieldwork of any kind was done in May. I had hoped to plant on 5 June, I had the tractor and planter ready and waiting but at 3am we got another 1cm.

Soybeans in this area really need to be planted by 25 June – you can plant later but it really becomes a gamble.

With none of my intended 600 acres planted, I am getting a little nervous.

Our corn needs sunshine and dry weather. From its appearance, I would say much of our nitrogen leeched out and getting a summer’s worth of rain in a few weeks causes that.

For the most part we have dodged the severe weather, but mid-May saw a strong storm come through, causing damage to several barns, taking down some power poles and knocking down trees, as well as laying some wheat flat.

That same evening a confirmed tornado knocked 30 rail cars off the tracks about 20 miles from my farm and destroyed some farm buildings.

Our state legislature continues to meet in their 18th day of ‘overtime’ trying to fix a self-induced budget mess.

A state senator from Johnson County, which is in the urban, wealthy Kansas City area, has continued to do his level best to raise farmland taxes, still claiming farmers aren’t doing their fair share.

One proposal was a flat $3/ acre increase for the privilege of owning farmland in Kansas.

This seemed better than the several hundred percent increase he had proposed, but was insulting all the same.

Other proposals included putting sales tax back on farm machinery, along with not raising taxes and putting through a 6% across-the-board spending cut.

Our state government has now surpassed the federal government in terms of partisanship.

Interesting when you consider the fight is mostly between members of the Republican party, since it holds a very big majority in Kansas.

Between the weather and the government, June might be an awfully stressful month.