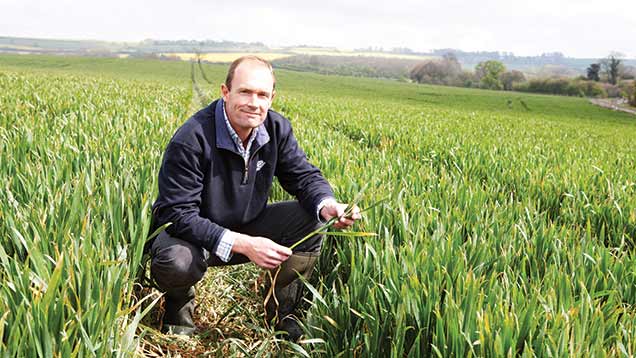 Thankfully we haven’t seen the predicted light leaf spot typhoon, despite not treating, and we have managed not to spray for flea beetle, pollen beetle, seed weevil or pea and bean weevil.

Plus, as luck would have it, the wheat is still pretty clean, even without a T0 or a modern SDHI at T1.

Not everyone will agree with such savings and conditions may have gone with us, but I do sometimes feel as if I am trying to escape the pull of a chemical black hole.

In fact, I am  trying to ignore communications from within the black hole, telling me I can buy nitrogen fertiliser 18 months before I’m likely to get any money back from it.

I recently completed an excellent course at Rothamsted on current research in crop production. For my project I looked at how we might back off the insect control arms race and start with a default position of not using any insecticide in the whole rotation, only resorting to applications for occasional firefighting.

I believe we can do this by moving beyond monitoring and thresholds to using a whole raft of proactive techniques as part of a system.

These could include varietal traits, companion crops, trap crops, compost, nutrition and encouraging beneficial predators through targeted margins and no-till.

The PGRO even have a cunning plan to lure bruchid beetles into a trap where they would be infected with a pathogenic fungus. I love it – more cunning plans please.

At a meeting on long-time no-tiller Simon Chiles’s farm in Surrey, the no-till topic actually stayed mostly in the background as we were fascinated by crops of triticale, soya, lupins, phacelia and wheat varietal blends.

Some areas were treated with arbuscular mycorrhizal fungi. These little fellas can effectively increase the crop root area up to 700 times, giving increased efficiency in nutrient and water use.

Having been around for about 500m years, they are not new, but getting a root inoculum product to work in combinable crops is.