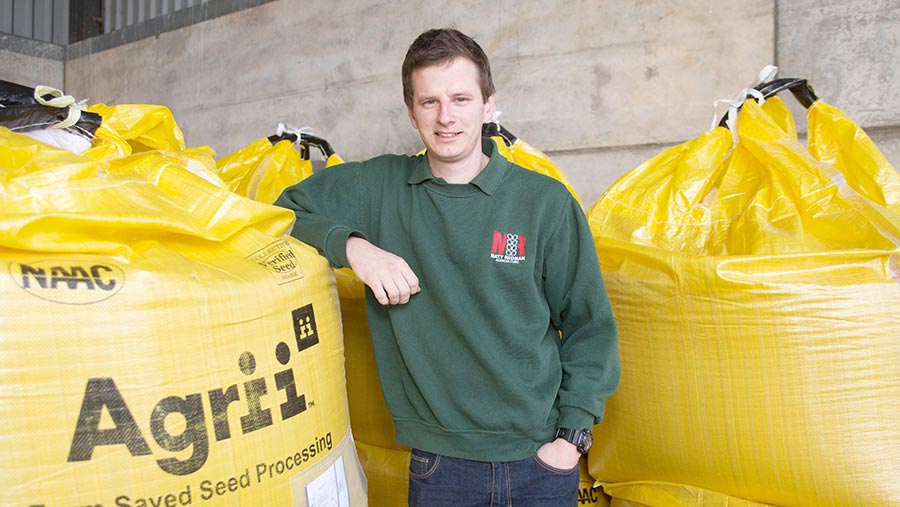 March is usually a fairly busy month, but this year it has been quiet from a farming perspective.

Most of the farm is heavy clay, so always takes time to dry before spring drilling.

I’m a firm believer in being patient and waiting for soil temperatures to warm up before drilling.

See also: Why one firm is using a biofungicide in its disease strategy

This year I’ve been lucky to take on some lighter, free-draining, chalk ground.

I’m sure I’ll wish it was heavy clay in June, but for now I’m happy to have been able to get on the tractor and get it drilled a few weeks ago.

Winter linseed struggled with the cold weather in February, and areas exposed to the wind or frost have experienced some fairly major dieback, but look to be pulling through now.

Unfortunately, I think this will lead to some very uneven crops later in the season and make a growth regulator application difficult to time correctly.

Oilseed rape, as usual, is a mixed bag. Early crops broadcast into winter wheat look great, but where it went into spring wheat and was left in the bottom of the standing wheat for longer it struggled to get away.

Fields direct-drilled in early August have plenty of plants, but were smaller through winter and have recently been the pigeons’ dinner of choice.

In all, 80% of what was broadcast or drilled will be taken to harvest at present, with 10% being written-off due to overwinter waterlogging, and 10% as a result of poor establishment and pigeons.

I never know where to budget yield for spring crops as they can vary so much.

My own experience is limited to three harvests and each year has been an exceptional year in some form.

My first year here we didn’t start any spring drilling until 7 April due to a wet spring, but it then dried out and hardly rained until harvest, much like 2020.

2019 was the opposite and spring crops were drilled in February, followed by a fairly good year with what I would consider above-average yields.

So, for this year I might just pin some yields to a dart board, blindfold myself and throw a dart…