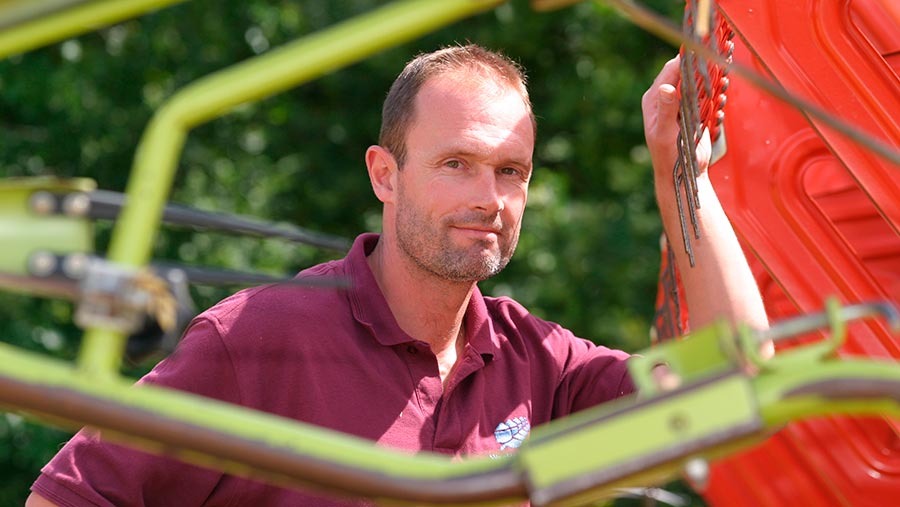 These earlier starts do rather interfere with my pre-harvest break, but might enable earlier cover crop planting, as in nearby France.

Our barley is about 13% moisture, but the straw is still a little green and, with quite a large-looking swath and imminent showers, baling may take patience.

The yield meter figure is not printable, as it is laughably optimistic, but hopefully it’s a good sign.

The straw goes into my brother’s cattle yards and the dung from two years ago will return to the fields prior to oilseed rape drilling.

With the grain trailers having to drive off the tramlines to avoid the swaths, plus the dung spreaders’ tracks, I anticipate that some remedial low-disturbance sub-soiling may be required.

Hopefully, this will also help the OSR establishment.

Perhaps the dung, pea and bean companion crops and standing stubble will put the flea beetle off, and maybe they will be attracted to some trap crop mustard – and possibly a new seed dressing and an odorous spray at cotyledon stage could be useful. Or maybe we will just be left with a legume and barley cover crop.

Disease levels have been pretty low this year and our trial with a cheaper azole-based programme has looked as clean as the more expensive SDHIs, albeit with robust varieties and backed with a foliar nutrition programme based on leaf tissue tests. The proof will be in the combining.

However, I was disappointed recently when Fera came to do their annual disease survey. Their accompanying questionnaire on inputs only asks about fungicides and ignores nutrition, which many people in the UK and around the world have found can significantly reduce disease.