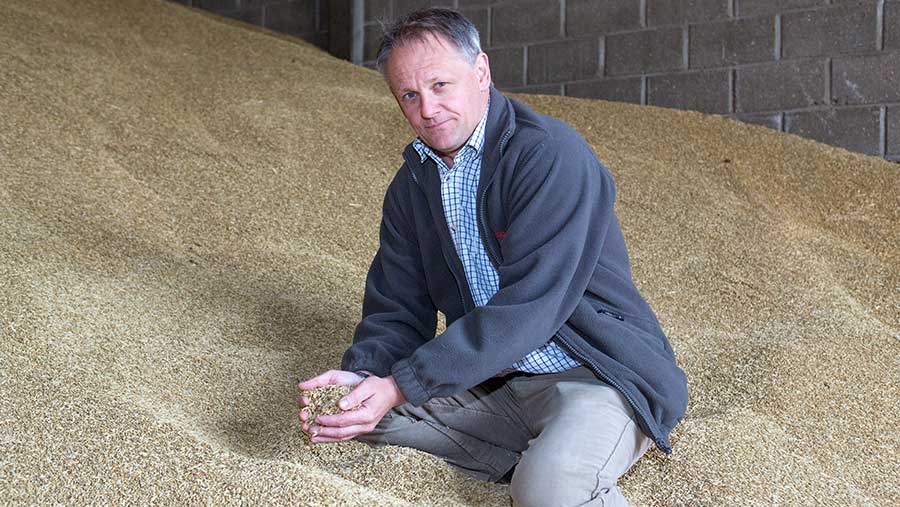 Cereal harvest results are now in. Winter barley produced a thin sample on the lightest of land, with an average yield.

However, the six-row hybrid on some of our heavier soils delivered a pleasing sample and managed to achieve more yield than expected – some 10% above the average.

Very pleasing, given the drought conditions it had to endure earlier in the year.

See also: Tips on how to beat flea beetle when growing oilseed rape

By the way, heavier land just off the edge of the Brecks isn’t really heavy, it just has a small amount of clay in it that stops the sand blowing away. It certainly amuses many of my pals when I describe it as heavy.

Anyway, on to the wheat. Skyfall and good old Solstice were our choice to endure the elements. Thanks to June’s rain, both hit average yield and both have excelled in their milling quality and bushel weights.

With most Hagbergs in excess of 350, the hope is for Group 1 premiums. The only real challenge has been Skyfall proteins trending down towards 12.5%, and running a good 1% below those of Solstice.

Best ensure that the contracts have fallbacks for protein content then.

So, it is all really quite a nice surprise from what we were expecting before the rain. It just goes to show that a good couple of inches really can make quite a significant difference.

While it may not have been the easiest of conditions in which to harvest cereals in most parts of the country, it didn’t bother us too much in these parts.

Most people were wrapped up by mid-August and the cooler, damper conditions proved ideal to establish cover crops that are now just about keeping ahead of the flea beetle.

I say this with a considerable amount of finger crossing that it will continue to be the case. It’s just amazing how much damage such a small creature can cause.

Thankfully, we were all otherwise occupied when we had another secretary of state appointed.

It seems like they come around ever more quickly these days, or is it just because I’m getting older?

Members of our lobby organisations spend too much time bringing people up to speed, then before we know it, they are gone. Hopefully the new incumbent will be a quick learner.