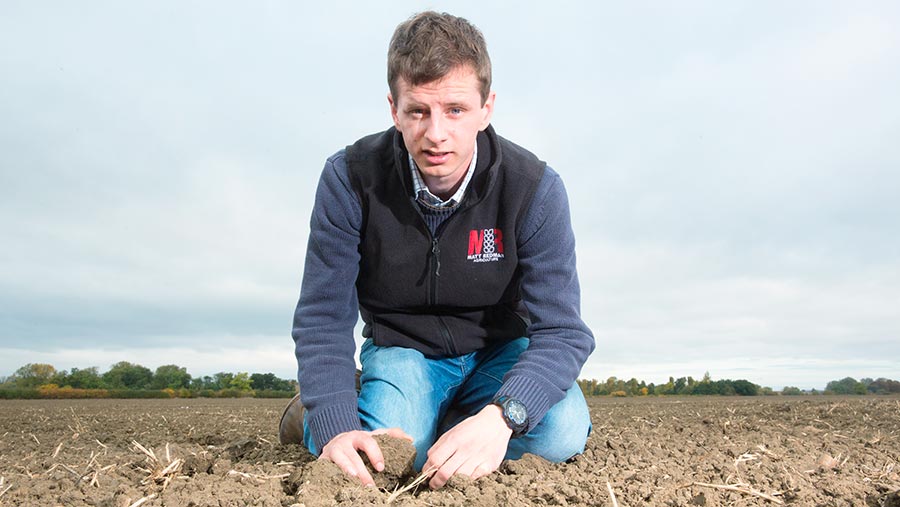 October is rattling on and conditions for drilling aren’t improving very much around here.

Although we have had some rain recently and seed-beds are generally good, it is still very dry and little has grown in stale seed-beds.

This poses a difficult question; drill now and risk increased levels of blackgrass germinating in crops, or wait and risk the rain finally arriving and missing the opportunity to drill?

I recently travelled up to Scotland for a friend’s wedding and was rather jealous to see field after field of emerging cereals as we got further north, and some very good crops of oilseed rape.

OSR that wasn’t drilled before the middle of August around here is struggling, or non-existent. Flea beetle has caused its fair share of damage and only added to the difficulty in getting the crop to establish in the dry conditions.

Another chance for beans

Break crops are proving a headache in more ways than one this year with the limited availability of winter bean seed, which was impossible to source at one point.

However, I think I have been successful now, so fingers crossed it materialises. Winter beans didn’t do well on the farm last year, but I think that was mainly due to late drilling followed by it being very wet and then very dry.

But they will be getting a second chance as I think it would be unfair to write them off after one year, and break crop options are very limited, especially if the OSR doesn’t make it.

Hopefully a better location on the farm and earlier drilling will compensate for the unknowns the weather will throw at us over the next growing season.

With potentially another four weeks of busy autumn work to go before things start to slow down, I’m not sure whether we should be praying for rain yet.

No doubt it will all even itself up in the end, and there will be winners and losers in the “how late dare I leave it” lottery – I’m going to start this week, so the dice has been rolled.