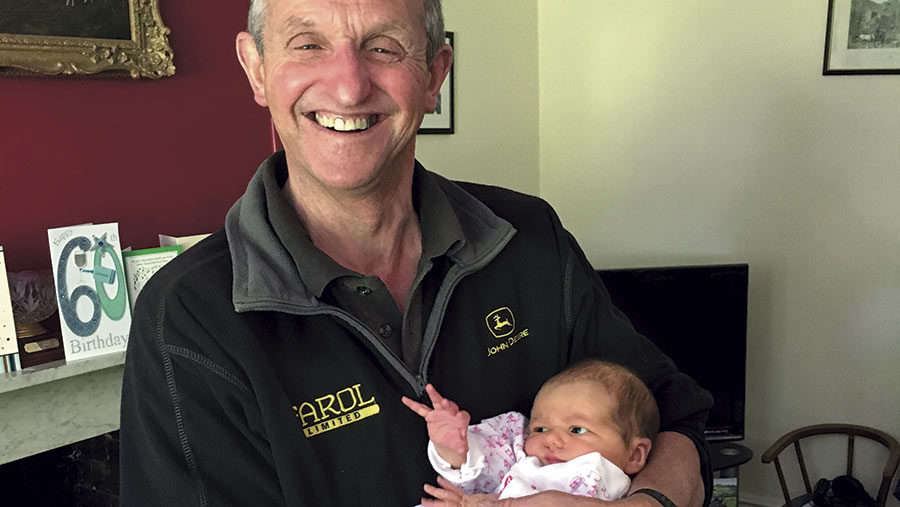 I am a grandpa. My daughter Rebecca and son-in-law Guy Champion are now the proud parents of baby Jessica. She burst into our lives on 21 May weighing in at 8lbs and 1.5oz and we all immediately fell head over heels in love with her.

I would like to say the new grain building is progressing at speed. The steel work went up really quickly, as did the concrete panels and roof.

However, the preparation of the floor and laying of the low ventilation pipes does seem to have dragged on somewhat.

As we rapidly approach harvest I am getting nervous, as we still have to get all the grain-handling machinery into the shed.

There are contingency plans, but these involve a shed which at the time of writing still has wheat in it that should have been moved in April. The latest “promise” is for the end of June.

Extra money is being paid, but that is not the point. If I had wanted it moved in June, that’s when it would have been sold for.

I really do think that the whole way we trade our produce needs an overhaul. It seems to be heavily stacked in favour of the buyers.

Two things I have noticed as I travel the southern part of the country are the amount of blackgrass that has escaped control and the widespread damage from barley yellow dwarf virus (BYDV) in wheat.

We have also suffered from both of these, with two or three fields where blackgrass control has been poor. A few tweaks to the rotation will mean these fields going into spring crops next year and cultivation withheld after harvest.

There are also patches of mild infection of BYDV in most of the wheat fields, despite the Deter seed treatment.

However, without this it would be a lot worse. There is no stunting of the crop, just a discoloration of some of the leaves. The heads are all out and look OK, but whether it will affect yields in infected plants and by how much is the real worry.