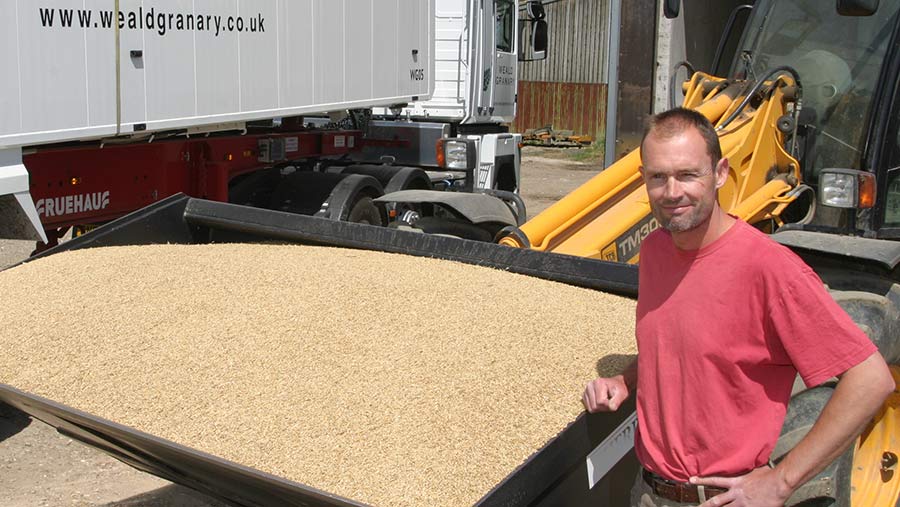 We were flying along with harvest, finishing the wheat about the earliest we ever have, and then the rain hit.

We’ve only manged a few hours in the past 10 days and it will be interesting to see how the spring barley has fared when it dries up.

So far yields are up, but proteins and malting nitrogens are down with us, and at our local co-op.

There has been the odd day when we have managed to plant some pre-emptive oilseed rape companion crops plus cover crops.

Although earlier-planted OSR may get away from the flea beetle threat at cotyledon stage, it seems it may accumulate more larvae in the stems and, for us at least, subsequently yielded less than early September planted crops.

We have also tried our straw rake replacement on the OSR stubble.

When we first started direct drilling, using a rake in this situation did help with residue distribution and slug reduction, and therefore wheat establishment.

However, it also redistributed grass weed seed, flints and sandstone.

We’re hoping the wavy discs we now have can do a similar job without the downsides.

Initial signs are good and they seem to be able to accurately work the whole width to 1-2cm.

It was confirmed to me at the excellent Groundswell show that any deeper than that and weed seed germination decreases, which seems to me like putting them in the fridge to keep for later.

I also heard that for weed control with cover crops, I really need to produce 4-5t DM/ha – too often I have only manged half of this.

This can stop the weeds seeds germinating, and the boosted beetle numbers can consume them at a rate of 1,150-4,000/sq m per day!

Apparently different beetles eat different seeds, so we plan to breed some partial to a bit of blackgrass.