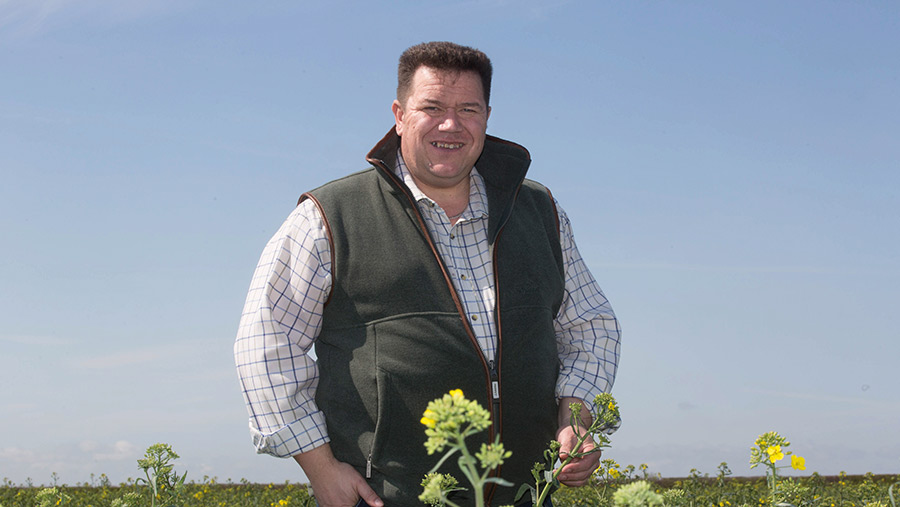 We managed to drill 160ha of the Group 1 wheat variety Skyfall in mid-March in reasonable conditions.

A thin cover crop of spring beans survived the winter and helped soak up some moisture, allowing the wind to dry the surface so we could travel. Hopefully the beans will have also fixed a good amount of nitrogen.

Mole draining last autumn turned out to be time well spent, as the fields that had been done travelled the best. The investment in a new mole plough and digger is certainly paying off.

We still have 65ha of spring barley left to plant. This is where winter wheat has been sprayed off due to too much blackgrass.

Ironically, it was the last wheat we drilled and not the first – which is usually the case. There was just not enough competition from the crop and a few acres didn’t get a pre-emergence herbicide due to travelling conditions, letting the weeds take hold.

Elderflowers have received slurry for nutrition and an application of bark chippings in an attempt to prevent the area around the plant from suffering from drought.

The bark should both suppress the weeds and keep direct sunlight from the soil under the canopy.

The problem with elders on clay is that they have fragile shallow lateral roots which soon snap off as our clay soils contract.

Hybrid winter barley reached growth stage 32 by 29 March. As soon as we get the tissue analysis back, we will start to put together a spray programme.

Last year’s on-farm trials again showed us the benefit of applying a trace element programme based on sap analysis, with benefits over costs where we compared it with programmes based on soil analysis alone. A combination of both methods seems the way forward.

Normally at this time of year, I like to congratulate the England rugby squad on a successful Six Nations campaign – and this year is no different.

Although the end result isn’t what they or I would have wanted, I still believe the squad has great potential and all that is lacking is a few more farmers in the team.