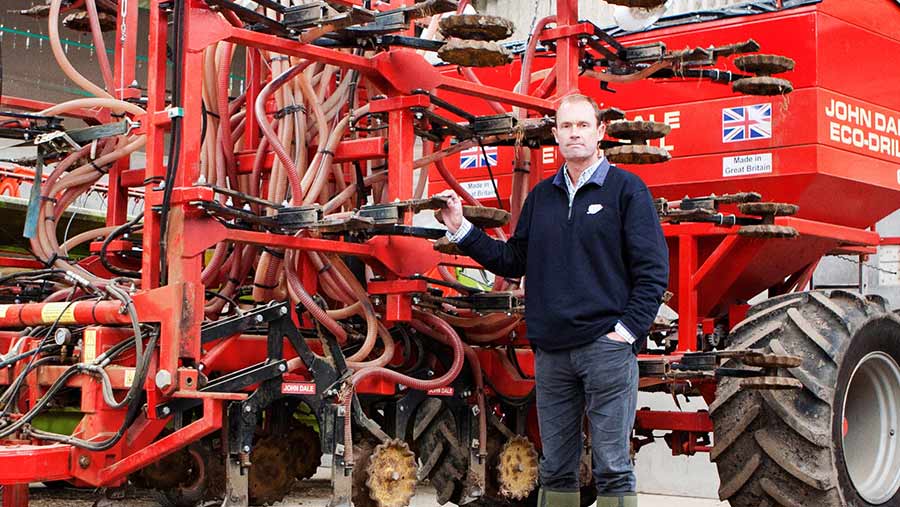 Last year we re-drilled some flea beetle-damaged oilseed rape and, as luck would have it, it yielded as well as the field ever has.

However, we still opted for a reduced area this year and combined it with all the cultural control approaches we could think of.

This included getting a pea and bean companion crop established a few weeks prior to low surface disturbance drilling, applying manure, and drilling both a trap crop and leaving nearby OSR volunteers.

Unfortunately, it is still being devoured at a rate that puts its survival in question.

Last year the crop we drilled earlier in August ended up with much more flea beetle larvae in the stems and therefore a lower yield than the early September re-drilled crop.

As a result I left the drilling this year until late August, only to find establishment would have been better with an early August approach, although what that would have meant for the larvae loading is not yet clear.

I cannot see an overall positive outcome from spraying, possibly repeatedly, non-targeted products to which the pest is at least 70% resistant to, and if it fails it won’t be replaced with more OSR.

Next year I will probably direct drill some seed out of the barn and if it survives great, if not, little effort and money will have been lost.

Our forage rape and stubble turnips drilled for sheep are also suffering, so we will have to look for alternatives, but it’s good to see the eight way cover crop mixes, that will also eventually be grazed, are doing much better.

What hasn’t helped any establishment is the almost complete lack of rain for the past six weeks.

However, as seems typical lately, we now have nine days out of the next 10 forecast as wet, so I have drilled a bit of BYDV tolerant barley in a low blackgrass area somewhat earlier than I planned, so at least I can start chipping away at the autumn programme.