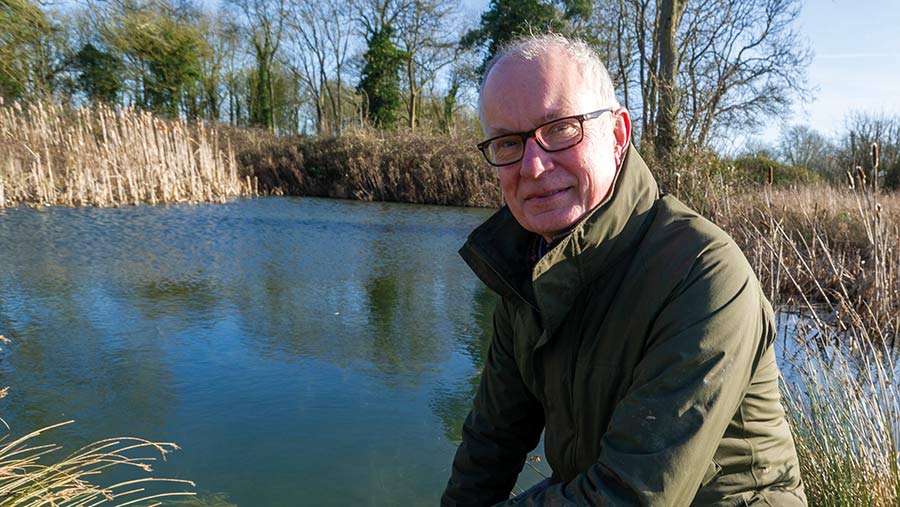 It’s two years since we have had a decent frost in Shimpling, but this month finally delivered -4C on 12 February which allowed us to go cultivating.

We concentrated on the overwintered green manures that our sheep had grazed.

Initially, we tried a light spring tine, but resorted to our Grégoire Besson Discordon to penetrate the frozen land which was set up to just take out the sheep pan and to prepare the ground for spring sowing.

With dry weather reported for two weeks we are poised for drilling!

A cousin of mine has been teasing me about taking perfectly productive fields and planting trees in the middle of them (see my previous agroforestry articles).

I have another blinder up my sleeve for him as we have just agreed to reinstate two former ponds in fields, one on a perfectly straight headland edge and the other almost in the middle of a 20ha field.

Not content with alleys of trees, we are now digging holes and filling them with water.

They are going in before the end of March with the help of Suffolk Wildlife Trust. We have lost so many ponds in the past and I’m pleased to be putting some of them back as well as restoring the ones that survived.

I also completed our Big Farmland Bird Count the day before the deadline.

Getting up at dawn I lucked in with huge flocks of fieldfares, starlings and yellowhammers.

We have always had large numbers of skylarks and I counted 23 on my walk, but also linnets and chaffinches, 20 species in total.

Notable omissions that I see regularly were our raven and barn owls. But most frustratingly, our flock of lapwings were nowhere to be seen.