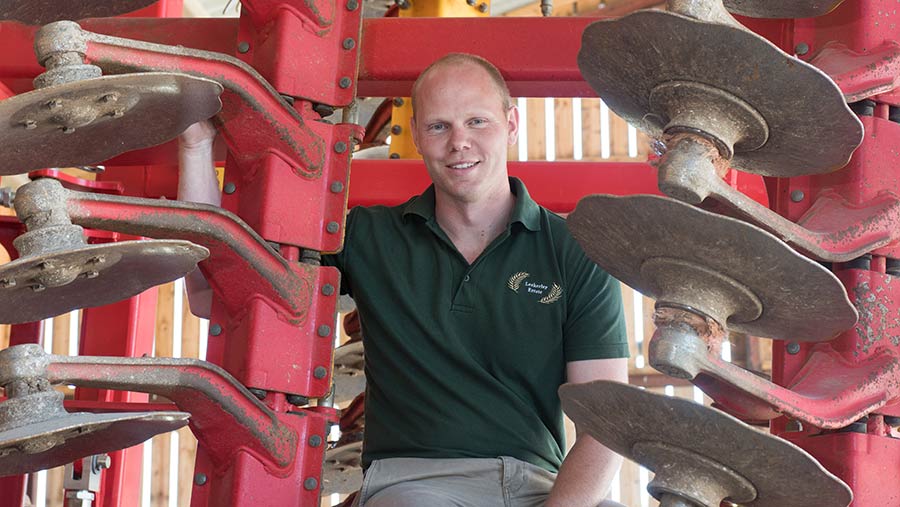 I am writing this in our new farm office, which on 15 October was connected to the super-fast broadband service that Virgin Media has been installing in the area.

Four years after I started, with countless journeys between home and the main yard, we now have drinking water, hot water, toilets, a phone line and internet. I feel spoilt.

Field work have been held up by wet weather, which I won’t complain about, as it was desperately needed. However, like others locally, we are keen to get on with planting wheat.

See also: How to identify and control umbellifer weeds

We are currently 40% complete with autumn drilling, with some Extase planted on heavy land, Craft winter barley and Mascani oats all in and through.

The remaining fields are wet, so we will need to be patient to prevent any damage.

Cover crops that established well have been slowed by the hot and dry late-August and September weather, but the constant rain since late September has helped.

Stubble turnips look well, although the cover crops are not as bulky as last year’s.

I took part in a presentation about maximising genetic potential of wheat in early October, which was great to be part of.

I approached it from a “at what cost” perspective, as the farmer ultimately carries the risk.

While preparing, I was surprised to find 47 wheat varieties on the Recommended List, of which six have a septoria score of 6.5 and more.

Of those six, four could attract a premium market, and of the same six, four have a nine for yellow rust and the other two have an eight and seven, respectively.

It made me think hard about value for money, the level of risk I’m prepared to carry, and also who the Recommended List is there for.

Matching agronomy to the variety is all well and good, but removing a large element of risk simply by choosing the right variety could see some significant savings from inputs and other wider benefits.

We were pleased to host our launch event as a new Leaf demonstration farm. We look forward to being part of this initiative. We welcomed HRH the Countess of Wessex, along with neighbours and friends from around the country who took part.

Lastly, congratulations to Ollie North for winning his winter wheat challenge with his crop of Extase.