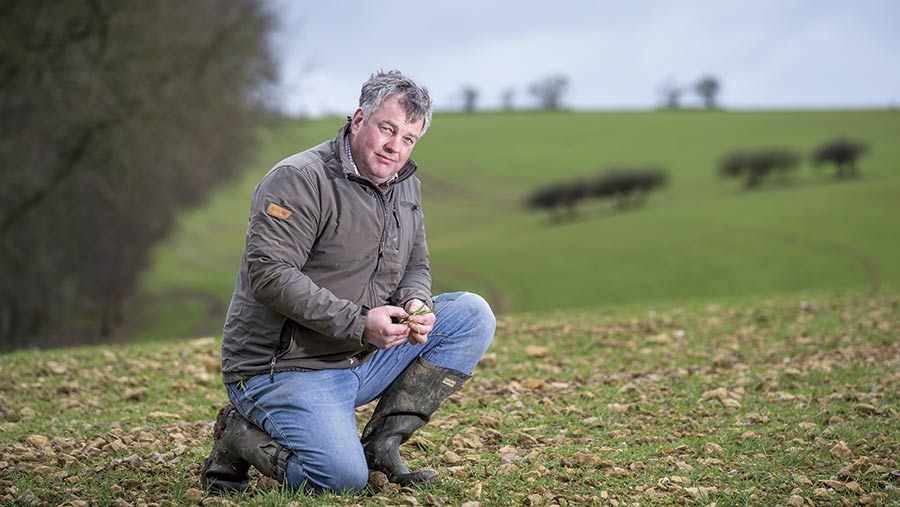 Wheat drilling is well under way here in Ryedale — but the main talking point has to be the cabbage-stem flea beetle epidemic that we have suffered for the first time.

Oilseed rape crops were established in good conditions, but as soon as they emerged they were ravaged by this pest.

Only now do we realise what the seed dressing was doing: how crazy is it to be repeatedly spraying broad-spectrum insecticide, killing beneficial insects, knowing that a neonicotinoid alternative would have just targeted the dreaded flea beetle?

The evidence that neonics are a bad thing because they kill bees in a real field situation, may be spurious at best.

One of our contributions to research and development this year has been an OSR cross-drilling trial.

This is part of the YEN yield testing project, which is funded by EIP-Agri. The basic idea is to investigate whether more uniform spacing may help plants grow and reliably yield more.

Using 300mm-row spacing, established in two directions at right angles to each other, should allow more space for the plants to grow without the competition of neighbouring plants.

Early indications are that plants are very evenly spaced, with little bunching down the rows. It will fascinating to watch the crop develop.

With dried-out soils, baked hard in June, it is not surprising that wearing metal has disappeared at an alarming rate.

Most dealers’ shelves are nearly empty and supplies appear very hand to mouth.

In the past, I have sometimes questioned the cost saving of hard-facing and tungsten re-enforced parts.

After my discovery of Ferobide weld on tungsten tiles last winter, we have certainly seen a fantastic wear rate improvement and subsequent saving in downtime this year.

What cost can you put on a prime mover held up for two hours while you change yet more parts?

Sadly, I fear the omission of serious reference to food production in the Agricultural Bill not only tells us how much environmental pressure groups are listened to, but how little food security is valued in Westminster.

Let’s hope that when the small print is revealed, we’ll be offered something more positive for the very uncertain post-Brexit future.