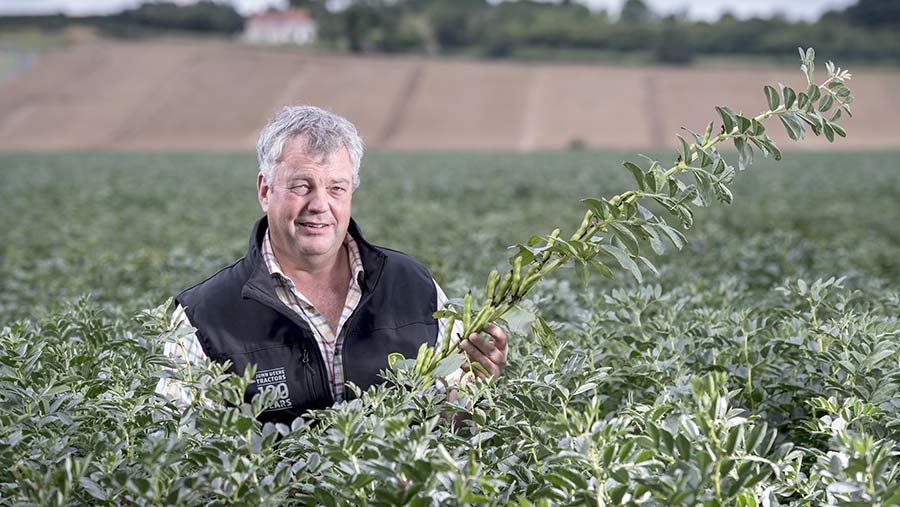 Wet weather has dominated the whole of the UK in the past month, and up in Ryedale, we were no different.

Where soil was worked dry, it has absorbed a remarkable amount of water and still retained its structure.

Somehow, we have managed to drill some winter cereals, dodging between showers with the trusty combination.

See also: Biostimulants – what they are and how farmers can use them

The beans were harvested at the end of September in amazingly dry conditions and were moved off the farm to be exported for human consumption. We’ll wait to see whether the crop was good enough for the Processors and Growers Research Organisation this year.

With only the maize left to chop, we can almost draw a line under the 2019 cropping year and focus on the year ahead.

One positive result of all that rain is the flush of weeds that had been stubbornly refusing to germinate.

Hopefully we won’t see a mass of grassweeds in the coming year and the enforced delay to autumn progress will have been a blessing in disguise. Time will tell.

If the planet is going to lose available land to grow food, due to rising sea levels, this is potentially the world’s biggest challenge.

When will the public connect the dots and start shopping with their heads as much as their wallets?

The Extinction Rebellion protests in London were based on good intentions, no doubt, but the disruption caused to everyday lives probably alienated more people than it recruited to the cause.

Because we live with weather every day, it’s still easy to believe climate change isn’t happening.

Governments need to make serious changes to the way we generate power and move about the planet.

Elon Musk may not be everyone’s favourite California-based billionaire, but I really think he’s on to something with his “gigafactory” concept; making electricity at huge scale when the sun shines to power batteries for when we need the energy.

Sounds simple, but such infrastructure is beyond all but the world’s richest individuals and governments.

We need brave leaders to take us forward out of the fossil fuel era.