More than 450 guests gathered at the Grosvenor House Hotel in London to find out who were the winners of ten farming categories. It was from these, that the overall winner, the Guys, were selected.

In the words of the judges, which included Sir Don Curry, the NFU’s director general, Richard MacDonald and the Times Countryside Editor, Valerie Elliot the Guys epitomise the face of farming’s future. 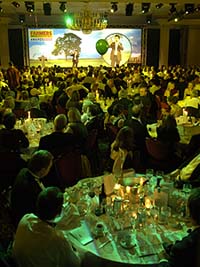 Their business and environmental credentials are outstanding, but what made them such worthy winners was their energy and enthusiasm to deliver on both. They are constantly looking at ways to grow their business.

And they are not simply champions of farming in 2005, but they are champions for farming – actively seeking opportunities to speak to people about the benefits that farming in this country delivers to all of society. As LEAF farmers they host numerous farm visits – from school children to bird watchers and Anglican Bishops!

This responsibility of engaging with the wider community extends to the media, where they take the opportunity to appear on TV and radio as well as contributing to the national farming press.

In the words of the judges, they are “wonderful advocates for farming as it moves forward and two outstanding individuals who deserve to be recognised as the best of British farming.”