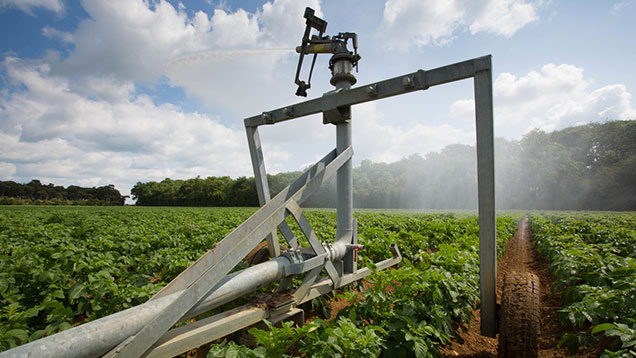 Farmers have pushed Defra to build a new framework for water abstraction licensing that boosts productivity without penalising their businesses.

Mr Stewart told farmers he was keen to meet them face to face, to listen to their views and learn about their businesses in order to inform future policy.

Speaking after the meeting Suffolk grower Andrew Francis said he was “very encouraged” by the detail and openness of the meeting.

Mr Francis said: “Potatoes and onions are the bulk crops at Elveden Estate, which produces 25,000t of potatoes and 35,000t of onions each year.

“We are totally reliant on abstracted water to grow these crops. Our three short-term abstraction licences are under review in the Water Framework Directive process.”

He added: “We don’t know, at this point, what our licences are going to look like in two years time.

“We are almost in limbo when it comes to capital investment.

“It’s crucial that whatever happens in the abstraction reform in the short term includes a long-term goal and view.

“It’s crucial that whatever happens in the abstraction reform in the short term includes a long-term goal and view.”
Andrew Francis, Suffolk grower

“Whatever framework that comes up must be flexible for all sectors and not close doors and be too draconian.”

Trevor Bishop, deputy director of water resources at the Environment Agency, was present at the meeting.

The NFU is pushing for a new system that links food security to water security and allocates a fairer share of water to farmers to allow them to grow food.

But the agriculture industry, which uses an estimated total of 2% of abstractions, is concerned it will lose out in the future due to pressure from population growth, climate change and related drought and water scarcity issues.

Speaking after the meeting, Paul Hammett, NFU water resources specialist, said: “The minister made it clear that there is going to be some decisions made on water reform.

“He wanted to talk to farmers about their businesses and how they use water. He wanted to know from them what they felt about long-term abstraction reform.

“It gave farmers and growers the opportunity to talk about the need to secure water in drought times and to remove barriers for reservoir building.”

CLA head of land use Damian Testa said: “The new abstraction licensing system must be supported by other government policies that can improve the success of the new system.

“If we are to have drier, hotter summers then it makes perfect sense that the new system is underpinned by a more sympathetic planning regime towards on-farm reservoirs.”

Defra is undertaking the biggest shake-up of water abstraction for 50 years, which could lead to significant changes in the availability and reliability of water resources for agriculture.

A Defra spokesman said: “This government is committed to reforming how water abstraction is regulated to create a better, fairer and more modernised approach that will reduce water waste, cut red tape and help businesses to focus on investment and growth.”