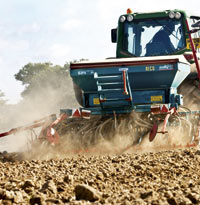 Farmers in those areas of the country which have not seen significant rain for weeks are hoping that they get enough in the next few days to make a difference.

The lack of moisture has caused problems for many growers delaying both drilling and herbicide applications. Many farms have seen little rain over the past 10 weeks.

Met Office figure suggest that it was the driest September across England since 1997 and the 11th driest in a series from 1914.

Rainfall was well below average across most of the UK, the main exception being parts of north-east Scotland.

It has been very dry across much of East Anglia, the Midlands, south Wales and Northern Ireland with less than a third of the normal amount.

The forecasters predict that many areas will see rain this week – but the big question is how much?

See what other farmers are saying on the forums and add in your own thoughts.