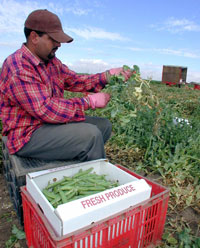 Crops could be left to rot in fields as the credit crunch forces migrant workers to leave the UK, a report by council leaders has warned.

Agriculture is likely to be one of the sectors hardest hit by an exodus of migrant workers during the recession, the report by the Local Government Association says.

A fifth of workers in the food industry are migrants and the weakening pound has meant many are finding it less profitable to work in the UK.

Large numbers of Polish workers, who make up 53% of the 72,000 migrant workers in the industry, are believed to be leaving Britian, leading to “serious labour shortages”, the report said.

Putting together a plan to ensure businesses can cope with the expected fall in migrant workers, the LGA said it had advised councils to look carefully for signs that migrant workers were leaving the UK.

It also called for councils to work with local businesses, the Learning and Skills councils and local job centres to train people to fill vacancies left by migrant workers.

Margaret Eaton, LGA chairman, said the report was a “stark reminder” the businesses needed to be alert to any local workforce changes.

“If seasonal migrant workers can’t be recruited, this will only get worse and losses could be passed on to consumers.

“Unharvested food will go to waste and food will need to be shipped in from abroad, both of which will damage the environment.”