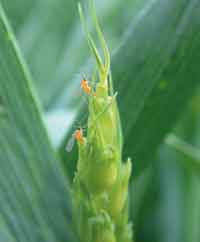 While monitoring remained vital for wheat crops that hadn’t reached flowering, after which the crop is no longer vulnerable, many crops in the south had already reached that stage, or would by the end of the week, reported Steve Cook of Hampshire Arable Systems on Tuesday [2 June].

So far, midge activity had been low in his area, he said. “The pheromone traps are not catching many – only one of my farms has had to treat.”

Elsewhere there had been some reports of midge flights, with ADAS reporting catches in the south west, across southern counties into East Anglia and central England. Pupation was under way as far north as Yorkshire, Dow’s David Roberts said. “This is the week to do the monitoring either with pheromone or yellow sticky traps, or by walking crops.”

But problems were very localised, said Richard Cartwright of Chichester Crop Consultancy, in Sussex. “There have been growers who have caught significant numbers – between 200 and 300 males – in traps.”

Farms from Romney Marsh in Kent to the Chichester plain had been affected, Mr Cartwright said. “There was also significant numbers caught in the Lewes area last weekend, so those fields will be treated, but it is very variable.”

Problems had been tempered by variety growth stages at the time of flights, however.

Some early-flowering varieties, such as Cordiale, had mainly escaped the threat, leaving later-drilled Solstice and Claire most at risk, he said.

Later-drilled crops were also more at risk in Andrew Cotton’s Oxfordshire/Berkshire area. “It is very localised. Most winter wheat, apart from the late sowings, is either beyond risk or into it. The later crops have probably another week of risk yet.”

Prime Agriculture’s Peter Riley, in Norfolk, was also quite relaxed about the risk. “We’re just starting to find midge in relatively low numbers, but a lot of crops are going to be too far gone for it to be a problem.”

Milling wheat growers and those in traditional midge hotspots still needed to be observant, he suggested. “But the general rule is it shouldn’t be a particularly bad year.”

Some growers were choosing not to treat, almost regardless of risk, Mr Cook noted. “At least a third of my growers just don’t want to know. They’re happy to take the odd hit, because they don’t want to harm the environment by spraying an insecticide at this time of year.”