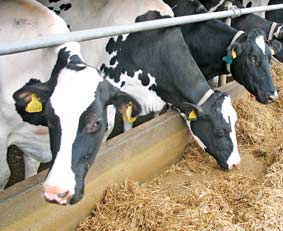 An animal feed crisis is looming with the continued inability of EU ministers to either approve or reject genetically modified traits for import into Europe, agrochemical company Monsanto has warned.

“The EU situation is ‘chaos as normal’,” Monsanto’s Colin Merritt told a Crop Protection Association-organised meeting of representatives from food chain-related trade associations. “There is still the absurdity of no GM trait goes through as a qualified majority.”

The delay in approving traits being grown commercially elsewhere in the world, combined with the EU’s zero tolerance for importing feed or food contaminated with unapproved traits, was putting huge pressure on animal feed supplies, he said.

“A crisis is looming, driven by the contamination issue. It is not just me saying this, Mariann Fischer Boel used similar words recently,” said Dr Merritt.

Animal feed shipments containing just traces of an unapproved GM trait have been turned away from ports this summer. “You only need some dust from a previous shipment of maize containing one of those traits, say, in a shipment of soya for it to be rejected because of the extreme sensitivity of the testing,” Dr Merritt told Farmers Weekly. “But it doesn’t add up to any significant level of GM content. It just throws the system into chaos.”

Once approval was given, then the contamination level in non-GM feed for that trait was set at 0.9%, he explained.

Whether a crisis occurred or was averted depended on coming up with a solution to zero tolerance, he said. “Talking to suppliers, some are managing to find feed supplies, but with more and more traits coming through, particularly in the US, if we don’t get it cracked, it will become increasingly difficult to source non-GM feed.”

Some experts are suggesting there will be shortages by December, although Dr Merritt is more circumspect. “It could happen in the next year to 18 months, but I have been hearing that time-scale for the past two years,” he admitted.

Two solutions had been discussed, he said. “One is to redefine the 0% threshold, the other, which we would prefer, is to make the current system work according to the timelines set. If traits were approved or rejected in those timelines on the basis of science, rather than the political decisions we have now, there wouldn’t be a problem.”