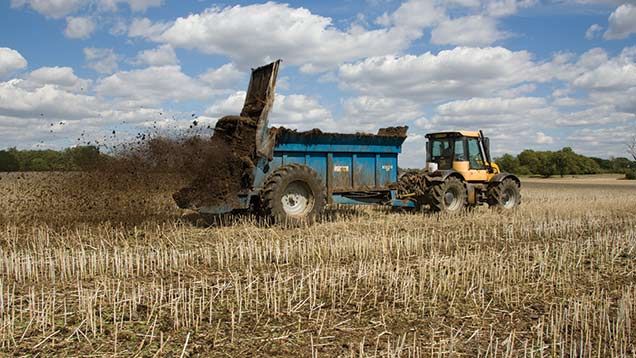 Soils rich in organic matter are more resilient to periods of flooding and drought as well as being less prone to compaction.

Organic matter levels have declined in UK soils, with a recent University of Sheffield study finding that the average has fallen from 8% at the end of the First World War to about 2% in 2013.

This is a worrying trend, as Shamal Mohammed, head of integrated crop technology at Agrii, believes soil organic matter “is a key component of soils and affects many other soil functions and characteristics”.

He points to the long-term 170-year-old Hoosfield Trial at Rothamsted Research, where spring barley plots have been given farmyard manure every year.

“Over the years, applying manure has led to higher levels of soil organic matter. This in turn has resulted in higher earthworm populations, higher yields and lower bulk density.

“The reduction in bulk density is because manure results in a more open structure,” Mr Mohammed says.

In 2012, his colleague Seyd Sha established an organic manure trial at Agrii Technology Centre (Agrii Focus) to investigate the effect of organic manure treatments on soil properties and yield of different crops.

What is soil health?

The term soil health has been used or overused by many, meaning different things.

The Food and Agriculture Organization of the United Nations defines soil health as “the capacity of soil to function as a living system…”, healthy soil able to sustain plant and animal productivity. But how can we measure soil health?

That’s the key question for Shamal Mohammed, who believes there is a need for a practical metrics to measure soil health that could be use by farmers to measure and monitor their soils.

There many sets of measures in the literature, for example the US Department of Agriculture uses more than 14 indicators, making it too complex and time-consuming for practical use by farmers, he says.

“We need fewer indicators to be an easy to measure in the field and have practical value for farmers.”

The factors used to calculate the figure may include soil organic matter content, bulk density (measure of compaction) and earthworm numbers.

Differences were seen, with compost applied at 50t/ha giving the greatest increase in soil organic matter, followed by farmyard manure at 43t/ha, compost at 25t/ha and biosolids.

The key finding is that anything is better than nothing in raising soil organic matter. “We saw a 0.4% increase in just a single season,” he adds.

The trials also showed the benefits of applying organic matter on bulk density, by opening up soil structure as well as raising levels of potash and phosphate.

“Earthworms have a role through their burrowing, feeding and casting, in decomposing and cycling organic matter and in supplying nutrients. These activities improve soil structure and increase the soil water-holding capacity,” he says.

These properties are valuable in increasing soil resilience against extreme weather events.

“Soils can hold more water during periods of flooding and have more storage in spells of drought,” he adds.

There are two key questions to consider when deciding how to improve your soil. First, what is the right level of soil organic matter content?

Farmers should get their soil tested for soil organic matter content, have a plan and then monitor it over time. Rather than aim for a target, the crucial thing is that it is increasing even by a small percentage, Mr Mohammed advises.

“Soil organic matter from natural processes takes a long time, it’s been estimated to take about 500 years to produce 2cm.

“Farming is the business of energy conversion. If we take energy out (food production), we need to put energy back into the soil (organic matter), by adding organic matter. You don’t need to wait that long and you can add it directly back in”.

“For earthworm numbers, about 10/ft2 of soil is generally considered a good population in agricultural systems. If there are none, then you need to worry. Ideally do this in early spring as earthworms go deeper in autumn,” he says.

The second question is: what is the best recipe to feed earthworms? Trials carried out at Rothamsted looked at the effect of applying different sources of organic matter on earthworms.

This is might be because manure and straw mix offers a greater diversity of earthworm food.