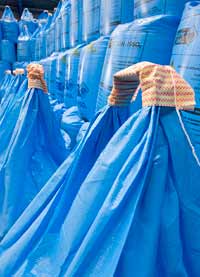 GrowHow UK‘s Nitram (34.5%N ammonium nitrate) is priced at £178/t delivered for June, based on 24t loads and including merchants’ margin. The company’s prices for July and August have also been published at £180/t and £182/t respectively.

Coupled with this, sterling was strengthening against the dollar so urea prices, paid in dollars, were falling, he added.

“First quarter [production] volumes will be higher than last season” said Mr Bowler. “This is because our investments at the Billingham plant have come on stream, resulting in higher production.

However, he added that, despite lower prices in the short term, costs could rise after Christmas as forward winter gas prices were twice today’s values.

Independent agronomist Paul Sweeney urged farmers not to delay. “Get it bought, and don’t look a gift horse in the teeth,” he said.

Mr Sweeney said he was currently researching quality stack sheets to recommend to AtlasFram members in the southwest with insufficient storage space, so that they could store fertiliser outdoors.

NFU Scotland president Jim McLaren said GrowHow’s 2009 pricing schedule would bring “huge relief” to farmers. “In the many discussions we have been having with GrowHow over the past year we have been calling for the 2009 price to be at the 2007 level or below. For GrowHow to announce a starting price of £175-£178/t for July is to be welcomed.

“Also to be welcomed is the flatter pricing schedule for monthly increases of £2/t for the next three months. This reflects well against previous years where the increase has been £5/month.”

Mr McLaren added that the strict payment terms imposed by fertiliser companies at the same time as unprecedented increase in prices last year had damaged the relationship between farmers and fertiliser manufacturers.