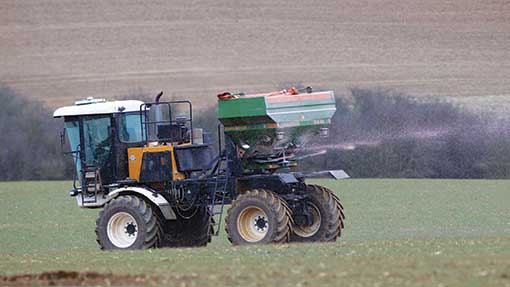 Cost: HGCA levy funding of £250,000 plus in-kind contributions from Agrii and GrowHow

Is the amount of nitrogen fertiliser you’re applying to your winter wheat crops giving you the results you want? Some crops may be being starved of N and a new project aims to help farmers make better use of this key input.

“We’ve an understanding of the average yield responses to different rates of nitrogen fertiliser, but we still don’t know whether nitrogen is being used on farms to its full potential,” says Daniel Kindred of ADAS. There’s speculation that, in many cases, it is not.

The LearN project is asking a sample of wheat growers to get involved from this spring for four seasons, to find out which crops are reaching expectations and which may benefit from a different N input to the averages currently recommended by industry-wide guidelines.

The benchmark for deciding N application rates is DEFRA’s fertiliser manual, RB209. While on average its recommendations are correct, it conceals a great deal of variability in nitrogen requirements seen in trials and we don’t actually know how much variation there may be between farms, explains Dr Kindred.

“The recent HGCA Green Food and Yield Plateau reports suggest that insufficient N fertiliser may be limiting yields on some farms.

The potential is thought to be about 20t/ha, but to achieve even half of this yield, some farms may consistently need more N than the average 190kg/ha recommended by RB209, while others may need less. We really need to find ways to help growers judge whether they are applying the right amount.”

Adding an extra 50kg N/ha with the main dose in April to one  tramline and putting 50kg N/ha  less on another may be the best  way for farmers to judge their N  management, if they can measure the yield differences well.

Growers participating in the project will be advised how to carry out tramline or strip trials on their farms. It is hoped yield mapping will distinguish any differences in response to N rates. The break-even point for an extra 50kg N/ha is an extra 0.3t/ha, based on a price of about £260/t for ammonium nitrate.

Data from 12 farms will be used alongside results collected from tramline and small plot trials on six core farms managed by NIAB-TAG, ADAS and Agrii. Later, it may be possible for growers anywhere to contribute to the project via online data submission and so benefit from the shared results. This novel approach should highlight the extent that farms and fields vary in their N requirements.

The LearN project will also test current N monitoring methods such as soil mineral N, soil organic matter and grain protein, confirming their value in predicting fertiliser needs. At the end of the four-year trials programme, cost benefit analysis of the trials and these other measures will support new N management advice for all.

Meanwhile, Dr Kindred would encourage any growers who suspect their crops could do better,  or suspect they could save N fertiliser, to have a go at varying N rates on the farm. It needn’t cost any extra money and it’s easy to adjust modern fertiliser spreaders to increase or reduce rates from the tractor seat using tramlines to distinguish treatments.

Knowing exactly how much nitrogen fertiliser your winter wheat crops need should save you money. Sarah Henly finds out more from lead researcher Daniel Kindred

This work should validate techniques to give growers greater confidence in applying appropriate N rates. Greater yields are likely where too little N is currently being applied, and fertiliser cost savings where too much N is used.

“Getting nitrogen applications right across the farm can boost output  and reduce environmental effect. This project is all about testing the rates used in-field in a relatively simple way.

The plus or minus 50kg approach should mean the results of this project are straightforward to apply on farm. It will be important to see whether N requirements vary between farms in a consistent and predictable way, and whether there really are a large proportion of fields where increased N would substantially increase yields.”