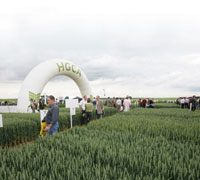 With Cereals 2011 just a few weeks away Richard Allison takes a quick look at some of the highlights of this year’s show.

Hundreds of cereal, oilseed and root crop varieties will be on show including the latest additions to the various Recommended Lists vying for a place in growers’ sowing plans this coming autumn.

The new CAP will slowly take shape over the next couple of years and while all growers know what effect volatility has had over the last few years, they now need some direction in how it might affect them in the future.

Growers will get some pointers at The Arable Conference, organised by The Oxford Farming Conference, where a total of 20 panellists debate the effects of CAP reform over both days. They will also debate the application of new technology on farm, which is essential if farming is to keep up with growing demand for food.

This year’s event sees the largest ever Renewables area, reflecting the growing interest in on-farm energy generation. Interest is being fuelled by the Feed-in Tariff and Renewable Heat Incentive schemes.

Sponsor Drax Power will highlight the benefits of its Green Shoots direct biomass supply programme, set up in association with Masstock Arable and agricultural consultant Brown & Co. Drax has also announced plans to set up a 28ha Energy SMART Farm to test and develop energy crops.

Knowing that building and owning an anaerobic digester plant is not for every farmer, BioG UK is seeking growers at the event to supply crops to feed its own plants. It says farmers can increase profit margins by providing an alternative break crop to their existing rotation.

Windcrop will be demonstrating a full-size, working wind turbine.

More than 50 trailed, mounted and self-propelled sprayers from over 30 manufactures will be on display in the Sprays and Sprayers arena (see p28).

Advances in boom technology are a key theme this year starting with Agrifac’s latest generation of “J” booms designed to meet increasing demand for wider, more stable and durable spraying booms. The Oceanis trailed sprayer from Kuhn, being put through its paces for the first time, features a suspended boom parallelogram and the Equilibria boom suspension system.

Landquip continues the theme in launching its CV self-propelled sprayer equipped with new tri-fold aluminium 36m boom. And not being left out, FarmGEM is displaying its vertical folding boom fitted to the FSV mounted model.

Finally, Syngenta will also be presenting the Farm Sprayer Operator of the Year award to one of the seven finalists.

Many machinery manufacturers are launching new kit and updated products and New Holland is no exception with its CX5000 and CX6000 combine range making their UK debut. Likewise, Massey Ferguson is to showcase its new concept in combine harvester automatic levelling on the 7360 and MF 7370 Beta ParaLevel models.

On the cultivation side, Amazone is launching its new Generation 2011 sowing technology, which sees a new roller drill system featuring on its revamped D9, AD, AD-P and Cirrus drills. And following the success of its larger Hybrid drills, Claydon is releasing a 3m fixed-width version at Cereals.