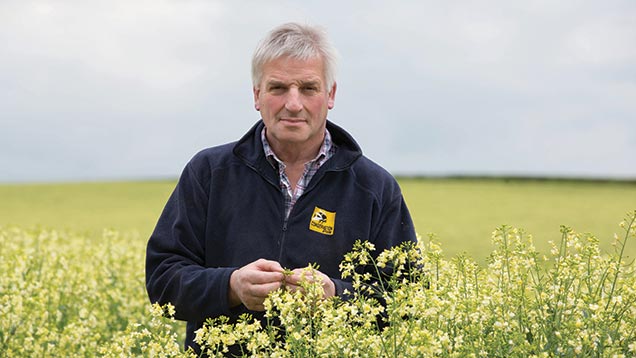 Significant crop damage caused by cabbage stem flea beetle has prompted Robert Law to seriously rethink how he will establish affected crops this year at his  1,500ha Thrift Farm near Royston.

Cereals, turnips, mustard, forage rape for seed and sugar beet are grown, together with 300ha of grassland supporting a flock of 2,500 ewes. He also manages 500ha of Nottinghamshire sandland.

Nearly all of the 89ha of forage rape grown for seed at Thrift Farm, together with more than 40ha of stubble turnips (grown for both seed and forage) were lost to flea beetle last autumn, causing financial loss and significant disruption to the farm’s rotation and sheep enterprise.

Some crops were redrilled straightaway, and despite repeated pyrethroid applications, further losses meant all bar 8ha of stubble turnips went into other crops, including oats, rye and barley.

“Although crops emerged well, they were gone in just a day or two and we lost nearly everything by the end of September,” Mr Law says. “Although we managed to redrill land with other crops, losing a key break crop has really messed up our arable rotation.”

He acknowledges losses may have been exacerbated by the relatively poor establishment achieved with the Sumo-mounted broadcaster last autumn.

“It is a system that has worked well on our light, chalky loams for several years, but last September was very dry and land wasn’t consolidated well, so crops were a sitting target for flea beetle in some ways.”

The only crop to make it through the winter was the 8ha of stubble turnips that were resown with the Horsch drill, and he believes there may be a case for going back to more traditional plough, cultivate, drill and roll-based establishment.

“It is certainly an option we are considering. These are bread-and-butter crops to us that we have been growing for seed over many years and can’t afford to just give up on and stop growing.

“Even when we were able to use [neonicotinoid] treated seed in the past, we only did so occasionally, yet never experienced a problem like last autumn, so it remains to be seen whether it was a one-off or is a sign of things to come. Interestingly, the stubble turnips we grew in Nottinghamshire were marvellous and didn’t need spraying [for cabbage stem flea beetle] at all.

“The bigger issue is the fact pyrethroids just didn’t seem to be working,” he adds.