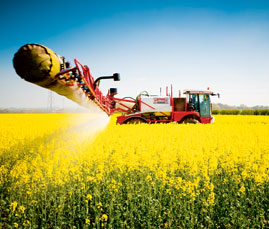 Applying foliar nitrogen during flowering to oilseed rape crops increases gross output by around 0.24t/ha, according to HGCA-funded research carried out by ADAS. That could be worth as much as £40/ha in extra profit.

Foliar nitrogen applied at the end of flowering at a rate of 40kg/ha increased seed yield in three out of four experiments.

However, the economic benefits from increased seed yield from foliar nitrogen were offset by a reduction in the percentage of oil within the seed by around 0.9%.

Gross output responses, which account for changes in seed yield and oil content, ranged from zero to 0.4t/ha, and averaged 0.20t/ha across the trial sites.

This means that foliar nitrogen can be used to increase yield over-and-above what can be achieved from optimal applications of soil applied nitrogen, such as urea or ammonium nitrate, says Dr Berry. “It therefore should not be seen as a substitute for soil applied nitrogen.”

The dose response study indicated that foliar nitrogen rates of 20kg/ha and 40kg/ha both gave a positive gross output response – but 80 and 120kg/ha were not cost-effective due to a greater reduction in oil.

“We found that there is a wider window of application for foliar nitrogen than we expected,” explains Dr Berry.

The study demonstrated a large variation in yield response to foliar nitrogen, particularly between sites, but also within the same field when applications were made on different days.

Dr Berry says there is no evidence that the growth stage at which foliar nitrogen is applied explains the variation. “Environmental or crop factors were the most likely cause of the variation.”

For example, the trials showed a link between yield response and temperature, with most yield losses occurring when the temperature was 19C or more.

“Neither soil wetness, overhead conditions (sun or cloud), relative humidity or time of day affected the size of the yield response.”

The negative responses at high temperatures could possibly be explained by volatilisation, suggests Dr Berry.

“It’s possible there was a loss of foliar nitrogen from the plant surface as ammonia gas into the atmosphere (volatilisation) when foliar nitrogen was applied at 19C or more,” he explains.

“The industry knows that you are not supposed to apply foliar nitrogen while it is hot. That’s why most growers apply it in the early morning or evening.”

Across all the trials, oilseed rape was surprisingly efficient at taking the foliar nitrogen up, with around 70% uptake efficiency.

Further work is needed to identify environmental or crop factors that affect yield response, he adds.

The trials offer strong evidence that a response to foliar nitrogen of around 0.2t/ha is possible on most crops, Dr Berry reckons.

“We have found out that other than using it on warm days, all crops, whether big or small, have the potential to benefit from foliar nitrogen.”

Working on the ADAS figures of 0.24t/ha yield increase but with oil content down by 0.9%, the yield bonus from applying foliar nitrogen to oilseed rape post-flowering is around £40/ha.

Strutt and Parker’s agricultural consultant Will Gemmill has made this calculation based on a 3.5t/ha crop at £400/t, including oil bonuses.

“The cost of foliar nitrogen and spraying takes off another £40/ha, giving an approximate net gain of £40/ha.”

These figures assume that a high clearance self-propelled sprayer on wide tramlines of at least 24m is used and that the sprayer is causing limited crop damage, he adds.

Strutt and Parker agronomist Jock Willmott believes more growers will be tempted to apply late foliar nitrogen to oilseed rape crops this season – especially if the drought continues into May.

Most will have been completing their main spring nitrogen fertiliser plans within the last week amid concerns that the dry weather is hindering nitrogen uptake.

Mr Willmott agrees that responses to foliar nitrogen applications on rape can be extremely variable. He points out that growers are more likely to see a response if their main dose of nitrogen in the spring is sub-optimal.

But this season may be the year when you get a good response to foliar nitrogen, Mr Willmott suggests, especially if the drought continues. “If we get a rainy April and early May, we should expect the spring nitrogen applications to be taken up as normal,” he explains.

“But it’s possible part of the first nitrogen dose may have been washed out, and the second may have gone on while it is dry and if the drought continues through flowering, it’s likely the crop won’t be able to recover sufficient nitrogen to hit yield expectation.

“Therefore growers, especially those pushing for higher yields, will be more likely to consider applying foliar nitrogen if the dry weather persists.”

Growers should be looking at their crops around the end of April/early May before deciding whether to apply foliar nitrogen, says Mr Willmott.

“It typically costs around £35/ha for the foliar nitrogen plus application – around the same price as a robust sclerotinia spray – and many growers will consider this as money well spent, especially if the crop prices remain strong,” he adds.

Growers who are not used to applying liquid nitrogen may have to sort out some temporary storage for the product and possibly arrange for a contractor with a high clearance sprayer to apply it, Mr Willmott notes.

He stresses that growers must adhere to Nmax limits when calculating their nitrogen applications.