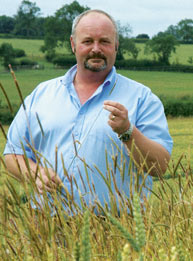 New herbicide formulations are set to improve the usability of key post-emergence herbicides this autumn.

It may be a while before growers have a much-needed, completely new active ingredient to use against grassweeds in cereal crops but manufacturers are trying to improve the ones currently in use.

For this autumn Bayer CropScience has produced a liquid oil dispersible (OD) version of Atlantis (mesosulfuron-methyl + iodosulfuron-methyl-sodium), while both Makhteshim-Agan and BASF have launched encapsulated versions of pendimethalin.

Both potentially have advantages for the user.

Feedback from field tests of liquid Atlantis, marketed as Horus and Hatra, found that it was easier to measure out part packs and to rinse out cans, Bayer’s Gilles Chevallier says.

“From a farmer survey, it is also clear that some farmers prefer liquids, while others prefer granules. Bringing out the new formulation brings choice to farmers.”

Efficacy of liquid and granule is equal. “Over a large number of trials the mean grassweed control from the liquid is equivalent to Atlantis.”

The other potential benefit for growers is it is easier to “play tunes” with application with Horus, according to Agrovista‘s Mark Hemmant. “If you want a finer spray you can’t engineer out drift with a three-star nozzle without effecting efficacy. You can manage drift with Companion Gold, but it is not compatible with Atlantis. It is with Horus though.”

In the firm’s trials there has been a benefit in mixing Horus with Companion Gold when using a 03 flat fan nozzle at 100 litres/ha at 3 bar and a forward speed of 14kph, he says.

“It is allowing you to use a finer spray, manage drift and not lose efficacy compared with spraying the same nozzle at 150 litres/ha and 10kph,” he explains.

“On large estates being able to cover more area in a day might mean you can spray more of the blackgrass in the autumn and be less likely to have a failure.” 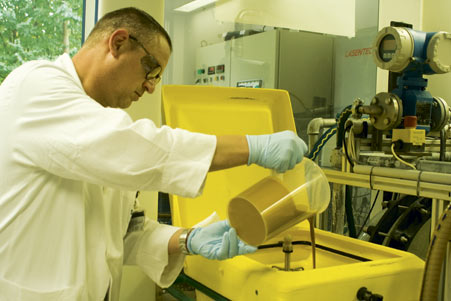 The new pendimethalin formulations will be welcomed by sprayer operators fed up with the staining the active ingredient can cause.

The central problem for formulation chemists with pendimethalin is how to get an insoluble molecule into a solution that can be delivered via a farm sprayer, says Mike Barrett of Makhteshim-Agan.

The answer was to use solvents to dissolve the pendimethalin, producing a strong-smelling, emulsifiable concentrate (EC) or a gloopy suspension concentrate, he says. Both contained solvents and can be highly staining.

But both Makhteshim (Cinder) and BASF (Stomp Aqua) have been working on a new formulation that uses polymer technology to encase the active ingredient within capsules that are suspended in water.

It is the encapsulation that helps minimise staining and makes rinsing of jugs and cans much easier compared with EC formulations, Sarah Mountford-Smith of BASF explains. “The active ingredient is locked inside the polymer coat preventing direct contact of the pendimethalin with the walls of the jug.”

Once diluted in the spray tank the capsules absorb water causing the polymer wall to expand and swell. Some rupture in the spray tank and during the course of spraying to release the active ingredient. Those that don’t rupture are primed to release on further contact with moisture, Mrs Mountford-Smith explains.

Typically in UK conditions that means the capsules will open at or soon after spraying, although if it does remain dry the controlled release should mean the capsules open when there is sufficient moisture to encourage weed germination.

Another potential advantage is for min-till users, she adds. “One of the properties of pendimethalin, particularly the EC formulation, is it has an affinity for organic matter, such as crop trash, which can effect efficacy. Micro-encapsulation minimises that binding meaning it should be delivered to the soil where it needs to be for weed control.”

Field trials will look at that theory in more detail this autumn, although other trials have confirmed some benefits, she says. In non-trashy seed-beds the performance of the different formulations is comparable.

Micro-encapsulation is just one advance to come out from more intensive research into formulations by BASF, Winfried Mayer, one of the firm’s formulation development scientists, says.

For the past four years the firm has undertaken specific formulation research alongside its formulation development work.

“The focus in the future will be trying to deliver more precisely active ingredients to the target, which may make it necessary to look at different formulation types, or modify existing ones using different surfactants or adjuvants,” he explains. “The aim is to make the product better, but also it might be needed to meet new regulatory requirements, especially if we’re not allowed to use some solvents.”

The research has already had success with the polymer capsulation used in the Stomp Aqua formulation, andin developing a tool that helped find the correct solvents to, for the first time, completely molecularly dissolve epoxiconazole in the Brutus (epoxiconazole + metconazole) fungicide formulation.

The tool allows the scientists to predict which solvents, or combinations of solvents, an active ingredient will dissolve into, he explains. Those combinations can then be tested in high through put screening.

“For Brutus it is unlikely we would have found the right solvents without the computational approach,” he stresses.

The real advantage of the epoxiconazole being completely dissolved is it can be more rapidly be taken up into the leaf.

With the Opus formulation because it doesn’t completely dissolve, there are small crystals of the active ingredient suspended in the solution that get deposited on the leaf, which need re-wetting or help from an adjuvant to dissolve and penetrate the plant, he explains.

“It means you only get gradual or partial penetration into the plant. But with Brutus you don’t find the crystals of the leaf, and the epoxiconazole is more rapidly taken up by the leaf.”

That doesn’t mean persistence is less though, he stresses. “It binds to the wax layer strongly, which means it is available for longer, and you get greater amounts on the leaf, which also helps compensate.”

Field trials back that assertion. The HGCA appropriate dose trials showed Brutus as having greater persistence than Opus (epoxiconazole), and more than you would expect from just the combination of the active ingredients.

The formulation also gives Brutus other advantages over Opus, he says. For example, the fungicide has very good spreading characteristics and stays on the leaf after being sprayed rather than bouncing off.

The latter is controlled by how much energy a spray droplet has, and depends on what surfactants are used in the formulation, but can also lead to more spray drift, he points out.