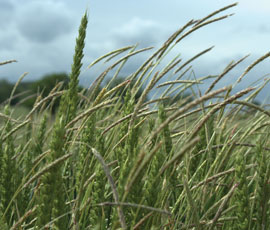 Blackgrass is creating huge problems in early drilled winter wheat crops with the aim now to tackle any weed flushes before they reach the three-leaf stage.

On the earliest drilled crops, Mr Cromie who is based in the south of England, is set to make the first post-emergence applications of mesosulfuron + iodosulfuron in late October or early November, and will add prosulfocarb (Defy) where blackgrass is a big problem.

“The best partner I’ve found when there is bigger blackgrass has been a prosulfocarb product,” he adds.

Wheat drilled before 25 September is likely to have seen the biggest flushes of the troublesome weed with the low dormancy compounding the problem in these crops.

Good seed-beds have encouraged both crop and weed growth and the dry period experienced at the start of the autumn may have hindered the activity of some of the soil-applied herbicides according to Mr Hamilton.

If growers are to maximise yield and reduce blackgrass seed return this season, he stresses it will be important to remove the surviving blackgrass flushes before they reach the three-leaf stage.

Mr Hamilton says if the herbicide Defy hasn’t been used, it should be considered as a residual partner in a grower’s post-emergence mesosulfuron + iodosulfuron blackgrass treatment.