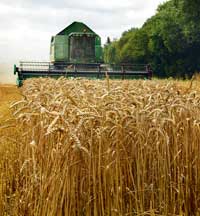 The French ministry has recently revised its estimate of wheat production to over 36m tonnes.

This is 300,000t above the previous estimate, and, while under the 36.9m tonnes produced in 2008, it is having a significant impact on markets.

France is the EU’s biggest wheat producer, accounting for 30% of production and up to half of EU wheat exports.

FranceAgriMer reports that the winter barley harvest is complete and spring barley 75% through in southern regions. In northern France, around 65% of the spring barley has been cut. Malting quality appears to be holding up.

Through central France the wheat harvest went from 15% to 90% complete in the first week of August. Further south it’s pretty much done, favoured by hot, dry conditions, though these are affecting the maize crop.

In the north, some showers have hampered combining. But good weather is forecast for this week so rapid progress is expected.

Wheat harvest is moving ahead in Germany, according to AgriMarketInfo, which estimates 65-85% of the crop has been cut depending on region. In the south, proteins appear to be lower and more variable than usual with yields similar to last year at around 8t/ha. Average OSR yields look set to top 4t/ha for the first time.

In southern Poland up to 60% of the wheat has been cut, according to analyst Sparks Polska, but only 15% in the north. A wet June and July in the south has created possible mycotoxin problems and has also damaged quality, with significantly more rejections for both wheat and barley.

The Romanian harvest has essentially finished, says the ministry, apart from some late wheat and spring barley crops. Wheat quality is the main concern. Normally, about half the crop is feed grade; this year it is more like 85%.

What it means for the UK EU markets have reacted to the larger than expected French wheat and German oilseed rape crops. This leaves the EU markets heavy with grain, and the UK will need to be competitive.

This puts pressure on UK prices, which will be compounded further if rain persists in August. Early signals point to a potential EU milling wheat problem, but we need to wait for the northern German harvest to show some results. This could mean volatile milling premiums over the coming weeks.