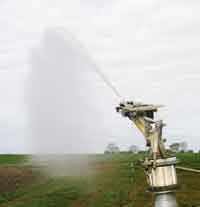 East Anglia and south-eastern growers in England are facing a tricky decision over whether to cut back or change wheat fungicide product choice as rain stubbornly refuses to arrive as it has in other parts of the country.

With some crops under significant moisture stress and having already lost some yield potential, combined with low disease pressure, some growers are talking to their suppliers about returning chemicals they feel are not necessary to apply.

Cambridgeshire grower Philip Bradshaw is not returning fungicides, but has changed his approach on parts of his area due to having “literally only millimetres of rain in past two months” and low disease pressure.

“So far, it has mostly been a cheap and cheerful triazole plus chlorothalonil mix, in the form of Cherokee, at modest doses, which has kept crops clean all the way through.”

Only on his most disease susceptible varieties will he be using the new SDHI fungicide, Seguris (epoxiconazole + isopyrazam), and then at reduced rates, he says. “But if the weather changes, we will change our fungicide inputs to protect what is there,” he stresses.

West Sussex grower Ed Tupper is proceeding as planned with his flag leaf programme, including the use of some SDHI fungicides. “But that might be it, if we don’t get any more rain.”

He had about 30mm of rain a couple of weeks ago, he says. “But it is pretty desperate.”

Kent grower James Standen is also sticking with his scheduled fungicide programme at T2, despite the farm only receiving 6-7mm rain in the past four months. “Winter wheats have managed to hold on so far and as we only grow milling wheat, we need to keep as much potential as possible.”

However, if dry weather continues, he says, he may need to revise the T3 treatment too.

But cutting back on fungicides can be a self-fulfilling prophecy, warns plant pathologist Bill Clark, director of Broom’s Barn. “Growers think yields will be down, so they put less inputs on, so yields are down, and then they are right.

“But the yield potential of the crop is not a good indicator of fungicide requirement,” he reckons. “Applying less fungicide can give big losses if you move away from the optimum. Responsive varieties, even in dry seasons give large yield increases.”

For example, the top 10 most responsive varieties on the Recommended List last year, a dry, unresponsive year, gave an average of 1.4 t/ha response to fungicides in HGCA RL trials.

“This is all to do with disease control, particularly yellow rust, of which there is plenty this year.

“I would definitely be using reasonable fungicide inputs, including SDHIs this season. There are some who are considering delaying the flag-leaf spray and combining it with the ear spray and also just using triazoles – this will ensure yields are low.”

In Norfolk, Jim Alston has responded to the dry weather by irrigating all his cereal crops for the first time. “We’ve put an inch on everything. I’m not looking forward to the next electricity bill. But I know it will pay for itself – you can see where it has gone on to the line.”

It means his fungicide plans have remained largely unchanged.