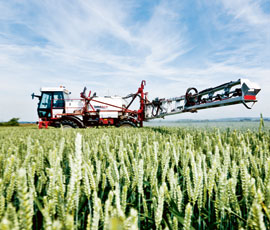 The fusarium risk to milling wheat has been over-rated and this fear may have led to an increase in T3 ear applications, some of which are unnecessary, an expert has claimed.

“If you look at incidence, the figures show a dramatic increase from 2007.” But he highlighted that this reflects the number of ears affected, but does not take into account severity, ranging from minor infections affecting to one glume, right through to major ear infections.

If you remove figures for Microdochium nivale, which produces no mycotoxins, and Fusarium poae, which often only causes minor infections affecting one to two glumes, the incidence is much lower.

Mean DON mycotoxin levels in milling wheat are more accurate, with the average levels of DON in HGCA/FSA surveys well below the EU maximum limit of 1250ppb. “Therefore, we should be talking about the high quality of grain produced in the UK with some of the lowest levels of mycotoxins anywhere in Europe.”

He blamed the press and industry in over exaggerating the risk. The result is that growers have responded with T3 “insurance” applications, the number of crops receiving a T3 had increased from 60% in 2005 to nearly 80% in 2009.

“Some crops in dry areas [low risk situations] maybe don’t need to receive one. It is adding to the pesticide burden, the EU is already pointing to the UK as a heavy user of pesticides and this won’t help.” But he admitted it was a difficult message to get across.

However, T3 sprays are not just about mycotoxins. Septoria is the most important disease, while yellow rust is a real concern if it gets on the ear. And fusarium species such as F culmorum and F graminearum can affect yield.

Looking at future options, he suggested the next generation SDHI’s applied at the flag-leaf stage with their long-lasting protection could allow a more targeted T3.

More specific products, such as prothioconazole, could then be used against fusarium at T3, where needed in high-risk situations.