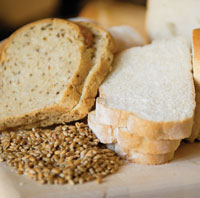 Enough seed of Group 1 milling wheat Gallant will be available this coming season for it to equal Solstice’s market share, Syngenta’s Samantha Smith said at a recent press briefing.

With 16,500t of seed available it could corner 45% of the certified Group 1 milling wheat market, she said.

In four years of Syngenta trials the variety had always exceeded the 13% protein barrier demanded by millers. “We’ve shown it can achieve higher yields and protein levels than Solstice with the same amount of nitrogen applied.” Nitrogen rates in the trials ranged from 240 to 270kg/ha, she noted.

Importantly, demand from millers was high because the variety performed consistenly in baking tests, she claimed. “All major millers have expressed an interest and are actively looking for it.”

High Hagberg falling number results, a hard endosperm and consistently high protein meant it produced good quality flour that exceeded bakers’ specifications, she said. “The latest analysis of Gallant from the 2009 Syngenta trials showed a Hagberg of 389, which is considerably higher than the 250 threshold.” HGCA results credited the variety with a Hagberg of 294, she added. “High Hagberg helps produce dough that isn’t too sticky and this helps bake a light textured bread.”

Good disease resistance, stiff straw and flexibility to be planted on any soil type, meant it could be grown in across most of the UK, she added. “It does require a robust fungicide programme and growers are recommended to use a split does plant growth regulator.”

She said the early maturity was to blame for poor HGCA trials results last year. Gallant yielded 7% below its five year average. “A lot of early maturing varieties performed poorly last year as they were harvested late. Gallant is one of the earliest with an HGCA ripening score of -2 so it suffered more than some,” said Ms Smith. “Managing this early maturity and harvesting early is crucial to achieving top yields and quality.”

One tip was to stick to a three way nitrogen split and not apply late foliar products, she said. “We recommend 20% of nitrogen to be applied at mid tillering, 60% at GS31-32 and 20% at GS39 – this last application protects yield and helps boost protein.”

Foliar nitrogen could be too late to give the crop the injection of nutrients when they are most needed, she said.