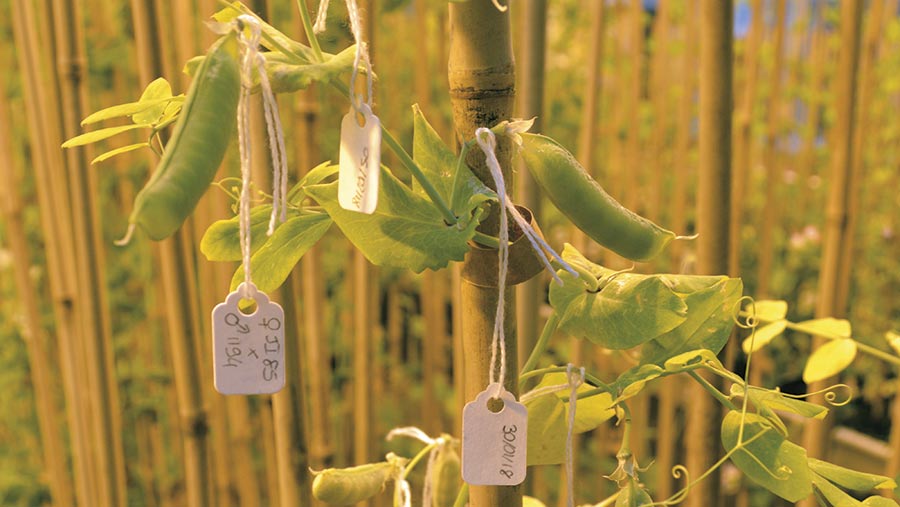 Scientists are injecting genes into pea plants to speed up introducing better disease resistance and improving the nutrition of this pulse crop within the next five years.

Adding valuable genes from wild pea varieties from Africa and Asia is set to bring improved resistance to the potentially devastating disease downy mildew, with fungicide control being limited to seed treatments.

Researchers are also well down the path of improving the nutrition of combine peas both for human consumption and for animal feed to potentially reduce expensive imports of soya.

“By injecting genes into pea leaves we can get a quick response on what reaction the genes have on the pea crop,” she tells Farmers Weekly.

Downy mildew is one of the most yield-damaging diseases of the combine pea crop, and major fungicide control only comes from seed treatments, such as Wakil. 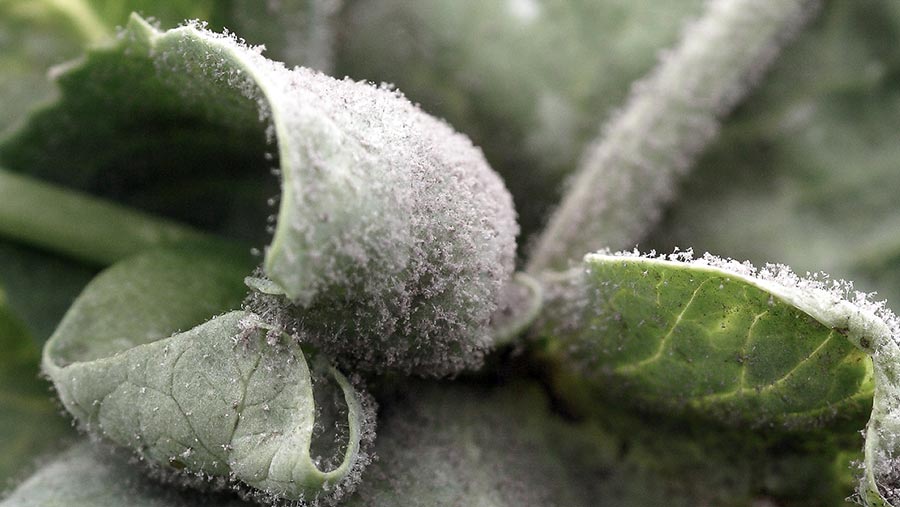 Now, Prof Domoney and her team have identified one gene giving good downy mildew resistance from a wild pea variety found in Ethiopia, and have introduced it into breeding material at the Norwich-based research station.

The gene can be injected into pea leaves to see the immediate reaction in a pea plant infected by downy mildew, says Prof Domoney, who is head of the metabolic biology department at the research institute.

Now, a second gene from an Afghanistan wild pea variety is being investigated, which grows to more than 2m tall in the institute’s glasshouses, and this new gene is hoped to be introduced into breeding material.

“We are now looking for a third disease-resistance gene and then it will be reliable enough to release to the plant breeders,” she says.

Downy mildew disease produces resting spores, which persist in the soil and can cause infections in young pea plants, which can kill plants before flowering.

Prof Claire Domoney with a pea variety from Afghanistan

Fungicide seed treatment combined with varietal resistance is seen as the best way to avoid serious losses, as there are no foliar fungicides which give effective control.

Most combine pea varieties on the Processors and Growers Research Organisation (PGRO) Recommended List have disease resistance scores in a narrow range of 5 to 7 – with only the new variety Blueman outside this range with a score of 9 – where 1 is very susceptible and 9 is good resistance.

Varieties such as Gregor, Stallion, Crackerjack  and Greenwood, as well as the marrowfats Aikido, Sakura and Genki area all scored 5.

This method of gene injection is also helping researchers at the centre push for variety improvements quicker than with conventional breeding techniques, with the seed-to-seed production cycle down to just 37 days.

“Once we know which genes we need and follow up by introduce them into pea crops they could be with growers in five years,” says Prof Domoney.

Researchers are focusing their breeding on peas rather than beans at the institute as the former has a greater genetic pool to look for traits, and the pea offers better potential for improving nutrition in humans and for livestock.

Gluten-free pea flour has benefits for those people with coeliac disease, caused by an adverse reaction to gluten – a dietary protein found in wheat, barley and rye – and one in 100 of the UK population suffer from this disease.

Therefore, researchers are looking at how pea protein can be improved to give the crop a wider use, especially when cooking or baking with pea flour.

They are also looking at improving pea starch – which is composed of long chains of glucose molecules – to give slower release into the human digestion system, and this could potentially help sufferers of type 2 diabetes.

On the livestock feeding side, work is underway looking at making peas more useful in animal feeds to help this protein crop replace imported soya.

This work is aimed at removing protein inhibiting digestants for poultry and monogastric animals, and so make the crop more useful in animal diets and replace genetically modified imported soya.

The gene injection technique is also being use to try to guarantee good colour in peas for human consumption, such as in marrowfats, as poor colour can reduce the price by £50/t or more.

“This could be a quick method to retain the colour in peas, and colour is extremely important to the pea processors,” adds Prof Domoney.

The John Innes Centre is an independent, international centre of excellence in plant science, research, genetics and microbiology, with more than 50% of funding coming from UK government sources.
Prof Domoney was speaking to Farmers Weekly after a PGRO-organised briefing at the John Innes Institute, based on the western edge of Norwich.