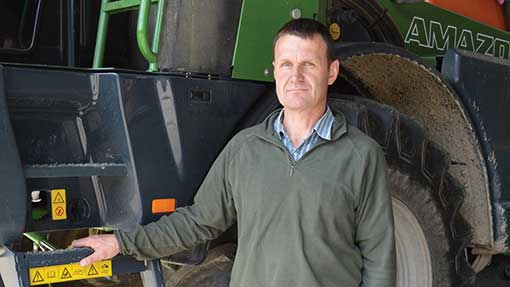 Farm manager Dirk Wendel (pictured)  faces a near trebling of his fungicide costs this season as he needs to spend more to control aggressive yellow rust in his winter wheat.

Farming in the upper Rhine valley – a largely vegetable growing area – he believes his wheat fungicide costs may rise by as much as €100/ha to fight off the rust attack.

A mild winter and a dry spring has encouraged yellow rust which he regards as a problem only once every 10-15 years, with brown rust generally seen as the bigger disease threat.

He is set to apply three fungicide sprays to keep on top of the rust this year which will make this an expensive year for him as he normally uses only one or two sprays.

“The main problem was yellow rust which was very aggressive in the early spring. After our first spray we need a second application very fast,” he tells Farmers Weekly.

In a normal season, his one or two fungicide spray regime would cost €50-75/ha, but this season he believes his bill will rise sharply to about €150/ha.

He grows around 250ha of milling winter wheat on the farm, with soils varying from sands to heavy clays, and where rainfall in the spring and summer can mean the difference between a yield of 6t/ha or up to 9t/ha.

“Normally brown rust is a big problem in a warm dry spring, but we have seen nothing yet,” he says.

Mr Wendel managers 460ha of arable cropping at the Rehhutte farm estate owned by BASF and run as a commercial farm of the edge of its research centre at Limburgerhof. The farm grows winter wheat, winter rye, grain maize, sugar beet and oilseed rape.