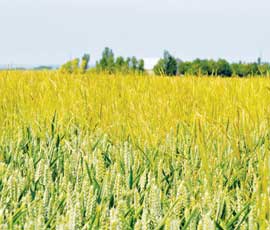 Blackgrass is set to be easier to control this autumn as the weed seed is showing the highest germination rates since records began.

Tests on blackgrass seed show that it is likely to give an early flush soon after harvest if there is enough moisture in the soil and growers can control this by chemical or cultivation means.

Blackgrass is the number one weed of arable growers with some spending more than £100/ha on selective herbicides which are become increasingly ineffective due to resistance.

Rothamsted Research says blackgrass seed tested from 15 samples across eight counties shows a germination rate of 64%, the highest since testing began at the research station in 2001.

This high germination rate is set to give a strong flush of the grassweed in September, rather than stay dormant and germinate slowly through the autumn and winter months.

Stephen Moss, blackgrass expert at Rothamsted says the high germination should give growers a good chance to control it, especially if they delay drilling to give time for cultivation or chemicals to kill off the flush of weeds before drilling the next crop.

“The high germination rate should be an added reason for growers to look at delayed drilling, which should pay dividends in a year such as this,” says Dr Moss.

As herbicides are becoming more ineffective, he is urging growers to consider cultural methods such as delayed drilling, spring cropping, rotational ploughing or using fallowing/grass leys.

“Clearly herbicides are not working and stacking them may be fine in the short term, but will not be sustainable in the long term,” he says.

Many growers are becoming more reliant on using a number of active ingredients in pre-emergence herbicides – or stacking, as control with post-emergence treatments has declined.

Dr Moss explains that in hot summers, blackgrass comes under stress and the seed shed is less dormant and hence has higher germination rates.

This summer’s heatwave was the longest hot spell since 2006, and that year showed a high germination rate of 56%, while the hot summer of 2001 gave a rate of 62%.

In contrast, the wet cool summer of 2012 resulted in a very low germination rate of 10% and high dormancy, which led to a difficult season for blackgrass control.

Many growers are being forced into considering delayed drilling to counter blackgrass and if there is a strong flush of weeds in September this can be killed off by cultivations or by glyphosate herbicide before drilling the next crop.

Rothamsted tested blackgrass seed this season from Hertfordshire to Lincolnshire and from Oxfordshire across to Suffolk.

Crop consultant ADAS reported only moderate level of germination from sites tested in Lincolnshire and Yorkshire, reflecting the cooler weather on the eastern side of the country.

Research consultant Sarah Cook says germination rates depend on the weather and also the maturity of blackgrass when the weather suddenly became a lot warmer after 4 July.