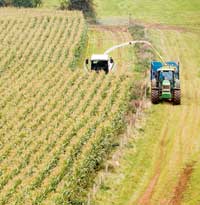 Forage maize growers should be targeting yields of 20t of dry matter a hectare, according to David Bright joint founder of Bright Seeds.

Speaking at the company’s maize study tour, Mont de Marsan, France, he said such yields could be achieved by all producers for the same cost as growing a 14-15t crop – the average yield produced by UK growers.

However, some growers are only getting 12t, with only the top 3% achieving close to the 20t mark, and Mr Bright said that it was attention to detail that would bring the extra yield.

“Maize does not like compaction,” he said. “Much can be done to minimise soil damage, starting with the previous crop which is often forage maize harvested in September and October.

Frequently, damage is caused not by the harvester, but by chaser trailers fully laden with incorrect tyre pressures transporting the harvested crop across the field.

“Tyres should be inflated to the lowest safe working pressure and then raised for road use. Simple systems are available for conversion from field to road pressures. Ex-aircraft tyres favoured by some contractors should not be used.”

He also advised sub-soiling certain parts of the field, such as headlands, where most compaction occurs.

“Drilling should be done as soon as soil temperature reaches 8C for five consecutive days.

“Do not be afraid to sow in April when soil conditions are good enough. Early sown crops achieve higher yields and earlier harvest – the longer the growing period the higher the yield.”

Sow at 43,000 seeds a Ha with rows 75cm (30in) wide. Drilling at the correct depth and spacing can only be achieved with accuracy when the seed bed is free of clods, with seed placement with a precision drill worth an extra 1t/ha DM.

Mr Torrens recommends using a “Starter fertiliser”, which in trials increased yield by 3t/ha DM. Any shortage of nutrient should be corrected in the seed-bed.

Farmers must be aware that newer high yielding varieties require higher levels of nutrients to achieve their potential than those grown 10 years ago. A 20t crop will need 150kg of N, 180kg of P and 180kg of K.

MGA consultant nutritionist Chris Savery, the Dairy Group, reminded delegates that while aiming for 20t of DM a Ha, harvest targets remain at 32% DM with a minimum starch content of 28%.

“Most clamps have some visible waste through poor fermentation or contamination, with low dry matter crops resulting in poor intakes.”

“Another cause of spoilage is heating of the clamp, lowering energy content and increase the risk of reduced intakes.”

From his experience, Mr Savery is of the opinion that additives are beneficial and worth the small extra cost.

To maximise intakes, basic food hygiene needs to be practiced and rubbish must be prevented from entering the TMR. Low intakes can also be associated with poor access.

Another cause of loss of performance of the dairy cow was an inconsistent diet or one that is unbalanced causing poor rumen health and metabolic upsets, he said.

For optimum cow performance producers need to feed a consistent diet so as to maintain good rumen health and gut function.

“On too many farms insufficient maize is grown and ensiled to last 12 months. You must have adequate storage and wait at least a month and preferably two before feeding,” he said.

And because maize silage is high in energy, the crop must be balanced with protein, with Soya meal being a first, but expensive choice. Alternatives are rape meal or urea. However, whichever protein is used, it is advisable to provide a mineral supplement.