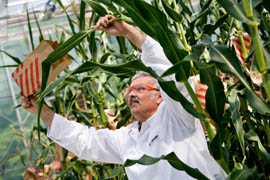 Yield improvements resulting from conventional plant breeding will not be enough to meet the increased demand for food and energy as world population increases, according to Dirk Inze, scientific director of the department of plant systems biology in the Flemish Institute of Biotechnology (VIB).

“Classical breeding is reaching its limits,” he said. “We’re still seeing a 1-1.5% increase in yields year-on-year in some crops, but that is not going to be sufficient to meet demand.”

Estimates suggested there would need to be a doubling in food production to feed the United Nations predicted world population of 9-10 billion people in 2050, he said.

“In terms of crop productivity, crop protection and conventional breeding offer some potential, particularly in Africa, of increases, but there is vast potential in biotechnology.”

Enhanced productivity was vital, he said, because otherwise as pressure for food increased people would try to produce food from an increased area, despite the negative effects on the environment.

But improved crop yields through biotechnology was more likely with the successful mapping of the genetic code of the most important food crops, he said. “We’re currently witnessing a true revolution in the knowledge of plants through understanding the genetic code.”

That had enabled researchers at the institute to identify functional genes that could potentially improve plant growth and yield, some of which had shown up to 48% yield increases when tested in field-conditions by BASF-owned Crop Design (see below), he said.

“I believe this will be the new revolution and make a major contribution in feeding the world.”

Researchers were also investigating factors that limited crop productivity, especially drought. “It is the most important factor – research on drought tolerance should get top priority.”

The first crops with improved drought tolerance could be commercialised in the USA in 2012, he said. “Trials have shown a 10% yield increase from the biotech crop under water limiting conditions.”

His team had recently unveiled a mechanism that could be used to develop crop varieties resistant to mild droughts. Initial research into drought tolerance had concentrated on improved plant survival under severe drought. However, the latest research suggested the plants more likely to survive these extreme conditions do not grow better under more mild drought conditions.

This was important as in field drought was rarely severe enough to kill the plant, he said. “The research showed that plants actively chose to grow slower when water is limiting.”

Further research found that plant hormone, ethylene, shut down leaf growth quickly when the plant sensed limited water availability. “If the stress is only temporary, growth can resume. This opens up new possibilities to develop crop varieties that keep growing during mild and temporary spells of drought that occur in the field, avoiding unnecessary yield losses,” he explained.

Increased crop productivity was the core goal of the biotechnology research undertaken at Crop Design, a commercial spin-off from VIB, acquired by BASF in 1996, said Marnix Peferoen, from the firm’s corporate communications department.

Rice was used as the core research crop as it was simple genetically and much easier to work with in the laboratory than wheat or maize, he explained.

“But any promising genes identified can be transferred into those crops to be tested, as well as developing those genes commercially into rice varieties.”

Around 1,000 genes a year are identified to be transferred into rice plants, which are then grown in the Crop Design greenhouses and studied for development and yield performance.

The team then takes pictures every week of every plant above and below ground from seven angles. These are then analysed by computer to monitor for differences, for example, in root development, crop height or leaf development, to look for traits that might be beneficial.

Plants are also tested for their responses to different growth conditions, including drought or lack of nitrogen.

Each plant is manually harvested for its seed with numbers of seeds and grain yields carefully recorded. “One of the keys is to identify genes that produce increased yields, and because we have collected all the data, we will also know why yield has increased.”