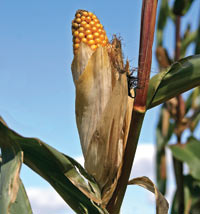 Choosing an early-maturing forage maize needn’t mean sacrificing nearly so much yield as it used to, reveals an analysis of the official NIAB variety lists.

But at the same time, Don Pendergrast, NIAB livestock crops specialist, advises growers to take particular care with establishment to ensure they get the most out of today’s much better early varieties, particularly under the sorts of challenging growing conditions seen over the past two seasons.

“This simple comparison clearly illustrates how successful forage maize breeders have been in producing varieties better suited to northern European conditions in recent years,” points out Mr Pendergrast. “It also underlines the extent to which our choice of earlier-maturing varieties has grown.

“There’s still a significant yield penalty from ultra-early Class 10s and 11s. But the fact that the best Class nine varieties can now stand alongside many of the later-maturing types in ME output means a serious disincentive to earlier maturity has largely been eliminated.

“With Class eight and nine varieties being ready to harvest up to two weeks earlier than their Class six counterparts, this is a great boon for those with less favourable maize growing sites concerned about getting silage safely in the clamp.”

While the progress achieved by modern breeding has been extremely valuable in extending the option of maize growing to many more UK livestock producers, Mr Pendergrast stresses early varieties still can’t make up for poor site selection or poor agronomy. Indeed, if anything, he sees earlier varieties placing greater demands on early-season management.

“Earlier maturity gives growers welcome extra leeway in harvesting,” he acknowledges. “By and large, though, varieties achieve their earlier maturity through a shorter vegetative phase. They tassel-up earlier in the season, so they have a similar grainfill period despite the earlier harvest.

“This means they have less time to put on crop bulk before switching to reproductive growth, so tend to be rather shorter than later-maturing types. Which, as 50% of the eventual dry matter yield comes from the leaf and stem, has always been the main reason behind their yield lag.

“Whether modern higher-yielding, early-maturing varieties get their improved performance from better initial establishment and early-season growth or larger, better-filled cobs, the inherent difference in their physiology makes it more essential than ever to get them off to a good start,” insists Mr Pendergrast. “They appear to be at noticeably more of a risk from poor establishment.”

“This has become crystal clear over the past season, which according to our records has been the single worst for maize growing in well over a decade. Varieties on less favourable sites that were established well enough to take advantage of the favourable growing conditions in the first two weeks of May went on to deliver handsomely. By contrast, those that weren’t sown early enough into good seed-beds with the right degree of initial crop care always struggled and were generally disappointing.

“So while growers don’t have to sacrifice much, if any, yield potential to maximise their harvesting security with today’s best Class eight or nine varieties, they simply must be prepared to put more care and attention into establishment if they are to reap the full rewards of recent breeding progress.”