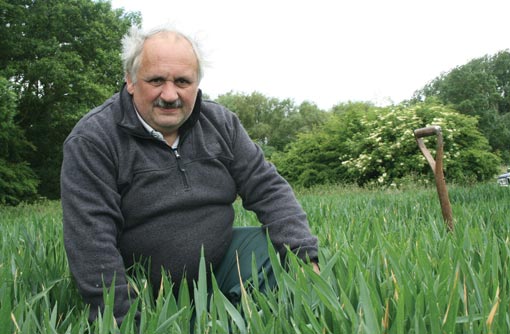 Modern seed treatments have evolved considerably since the time of the Egyptians and now include protection against seedling diseases and harmful pests, but their role in helping plants get off to a better start remains much the same.

While single purpose treatments continue to dominate growers’ choices – accounting for more than £20m a year in grower spending, according to the HGCA – the role of nutritional seed treatments in promoting crop performance has been less well publicised. So what are the benefits?

It’s not a simple answer and the different types can result in some confusion as to their purpose.

“Zinc-based solutions act much like plant rooting powder, while others provide mineral nutrients to make up for any shortfall,” says Malcolm Leitch of Aberystwyth University.

“The benefit of zinc-based solutions is that they stimulate the plant’s natural ability to produce the hormone auxin, which is known to promote growth.

As a former dairy farmer and maize grower, Graham Hancocks (pictured) had experienced the beneficial effects of zinc in promoting crop vigour long before he was encouraged to consider it on his wheat and barley crops.


So when it was suggested that he include a zinc-based seed treatment with his single-purpose dressing, he could see the possible benefits.


“We have a good relationship with Frank Littlehales of ReSo Seeds and he introduced us to Radiate as a beneficial treatment for promoting root mass,” says Mr Hancocks, who farms with his brother Keith at Alcester, Warwickshire.


“We applied it to a proportion of our home-saved seed in 2010 and split it across several fields so we could directly compare treated and untreated crops. The results were compelling,” he says.


Although he did not have any means of accurately assessing any differences in yield, he believes there was a small yield benefit to the treated crop. “At the time we had an old combine and no yield-mapping technology, but we had seen the trials data and were aware that the average yield benefit was about 0.4t/ha in wheat. Our experience suggests it is broadly the case.”


Initially tempted by the prospect of higher yields, Mr Hancocks has since come to appreciate the management benefits it offers and at a cost of about £10/ha he regards it as a small price to pay for helping the crop to establish better and faster.


“Our location and prevailing winds mean soil temperatures tend to fall away rapidly in the autumn and are slow to warm up in the spring so it is important to us to get the crop off to a good start, particularly where drilling has been delayed by maize harvesting.


“We didn’t drill this year’s wheat until 5 March and because of the disruption to the rotation have another area of untreated seed. Despite being drilled on the same day as the rest of the wheat, the untreated crop has struggled in comparison looking spindly and more stressed.”


In 2011, the product was applied to all his Viscount winter wheat and Retriever barley seed across his 101ha and effectively replaced a reliance on autumn applications of foliar zinc solutions.

“The intention is that the treated seed produces seedlings with greater root mass, which means they are able to search out a greater quantity of nutrients and water should they need to,” he adds.

Exactly how zinc solutions promote this effect is less well understood, but trials have associated it with the extended life of cells within plant tissue and increases in the quantity of beneficial rhizosphere bacteria around roots.

These bacteria mostly comprise free-living nitrogen fixers and are ubiquitous in soils.

The benefits of increased auxin production, however, are not confined to below ground. “Additions of it as zinc ammonium acetate (ZAA) have been shown to increase stem thickness in oilseed rape and root shape in sugar beet.

“Other studies have linked it with flowering in potatoes and an increase in the number of tubers produced.”

It is in stressful conditions, however, that the benefit of a root-enhancing seed treatment is most widely seen, says Dr Leitch. “Trials indicate that where conditions are favourable to plant growth there is little benefit to be observed as the crop has access to all it needs, but when conditions worsen and the plant is stressed then it is better equipped to cope.”

Keeping a close eye on crop nutrition is vital