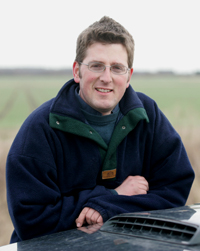 I attended a conference last week where NFU president Peter Kendall was the the keynote speaker. Unfortunately the A1(M) must have known that there was an agricultural event taking place, so the customary 90-minute delay ensued.

As I took my place in the auditorium and started absorbing the well-honed oratory, I assumed that I must have missed the part where the union chairman, spitting fire and brimstone, called all members to arms at the ports and fuel stations to protest at the high fuel prices. Alas not, we were told to take it like men as it was not a fight the NFU could win.

And then we were told that the industry needs to be more “self-regulating” to prevent further legislation from hampering our work. I have come across self-regulation before – it is normally the last thing my wife mentions before I go skipping merrily to the pub. To be honest, if my experiences in a social context are anything to go by, our mountain of paperwork could be increasing.

My biggest gripe of all, given that I am not always the NFU’s biggest fan, was that I agreed with nearly every word Mr Kendall said. Why should we complain about paying 65p/litre for diesel being put into our £100,000+ tractors, when the public are paying 135p/litre?

To prove the futility of Whitehall-born regulations, I have co-operated with two parts of government-directed legislation in the last year. The first was a Food Standards Agency audit, which wasn’t sure what it was trying to achieve, and the second was the Soil Protection Review. I can honestly say that neither I nor the wider public gained anything from either exercise.

Having spent the winter months completing my SPR, CPMP and LERAP maps, another self-regulatory trip to the pub may make sense out of the current madness.