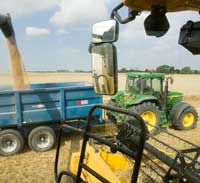 EU wheat prices are set for further falls of up to 10% as the weight of this season’s crop and growing stock levels, combined with weaker export demand, take their toll on the markets.

According to the latest report from analyst Rabobank, there is “little opportunity of a price recovery in French milling wheat futures, based on a second consecutive season of expanding wheat inventory in the EU”.

“French futures have fallen by over 20% in the space of only a couple of months and are now approaching levels not seen since before the 2006/07 price hike,” it says. “We maintain our bearish outlook for prices over the coming months, with a further 5-10% fall in prices expected.”

London wheat futures have also suffered, valued at just £91.75/t for November on Friday (11 Sep) compared with £98/t at the start of the month.

Rabobank says that, with the EU harvest coming in above expectations, any risk premium, which had been factored in, has now been eroded.

“Reflecting the improved seasonal conditions in the latter half of the season, the French agriculture ministry this week raised its soft wheat production estimate from 36.1m tonnes to 37.3m tonnes,” it notes.

The analyst now expects EU wheat production to reach 138m tonnes in 2009/10, down 9% from last year’s all-time record, but still the third largest crop ever produced.

Combined with this, it predicts a 30% decline in EU wheat exports to just 17m tonnes, even though it is likely to face less competition from the Black Sea region due to legal and quality issues.

But there is no shortage of other competing suppliers, it notes, and some of the EU’s key markets in North Africa and the Middle East have improved their own production this season.

As such, EU stocks are forecast to grow another 8%, on top of last seasons 55% increase, to top 20m tonnes.

Meanwhile, further pressure is being brought to bear on the world grain market by more favourable news from the southern hemisphere where, according to the HGCA, recent rains across the north-east grain belt of Australia have boosted crop prospects. A wheat crop of 22m tonnes is back on the cards.

And in the USA, latest reports from the USDA show that maize and soybean crops remain in very good condition as harvest approaches.

The one slight concern is over the spring wheat crop, with late planting now leading to late harvesting, and widespread rainfall challenging its condition in some states. But overall 74% of the crop is seen as “good” or “excellent”.