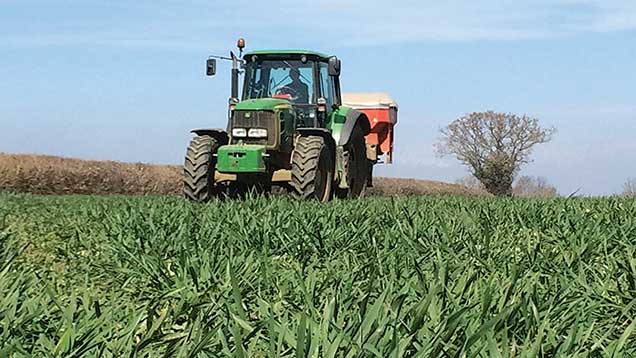 A policy of growing high-quality grain means milling wheat features regularly in the rotation at the Streetly Hall Estate, and a new variety is delivering high yields while still meeting the full protein specification.

Last year’s Group 1 premiums of up to £50/t made achieving the top specification very worthwhile, points out owner Alan Covey, who explains that all the crops grown on the estate’s four farms are selected for their contribution to the bottom line.

See also: What are the milling wheat prospects for harvest 2015?

“We look closely at what the crops cost us to grow and how they performed at harvest,” he says. “Everything must pay its way, which is why we change track sometimes.”

As a result, consistency is a key requirement of wheat varieties, whether they are grown for bread-making or for other end uses, says Mr Covey. “We need to know that they will come up with the goods, every year, regardless of the season or the conditions.”

“This new type of milling wheat removes some of the risks associated with growing milling wheat, which is a bonus in such a volatile market.”
Paul Norman

The chance to be one of just two farms to try the candidate Group 1 variety KWS Trinity in autumn 2013, before it was recommended, was a good opportunity for a number of reasons, says farm manager Paul Norman. Since then KWS Trinity has been both recommended and gained full Group 1 approval from Nabim.

“This new type of milling wheat, that offers both yield and quality, is of interest to us,” he says. “They remove some of the risks associated with growing milling wheat, which is a bonus in such a volatile market.

“There is also no substitute for being able to grow a variety on your own farm. It tells you much more about its suitability than you can glean from a set of scores on a list.”

He was also impressed by the disease resistance scores that Trinity appeared to offer. “Good disease resistance is becoming more important. Our preference is to tailor our fungicide programmes to the variety, rather than treat everything the same.”

“That was pleasing. We have grown Gallant very successfully here for the past six years and have achieved yields of 10t/ha with it in the first wheat position. In 2014, our average yield with Gallant was 9.55t/ha.”

Mr Norman acknowledges that Trinity appears to be a step forward in yield. “But it is still early days. We are growing it again this year for seed on 40ha, to see if it can repeat this performance.”

The test Trinity crop also made the grade for milling. “It produced a grain protein of 13% and a Hagberg of 422. Together with its higher yield, it was a good result.”

Mr Norman admits that it can be a struggle to achieve top proteins on the 1,394ha estate. “It is often better for us to take a £2-£3/t deduction with a protein content in the high 12s  than to keep pushing for 13%.”

So the slightly lower protein contents found in both of the latest milling varieties – RAGT’s Skyfall and KWS Trinity – are not a huge concern to him. “Before we switched to Gallant, we grew Malacca for a number of years. It was similar in that you had to feed the yield, as well as look after the quality.”

With the Trinity crop he took the extra precaution of conducting a green grain test at the milky ripe stage, with the help of Camgrain. The results showed that some extra foliar nitrogen would be required on the ear, in order to hit the milling target.

“It meant that we spent an additional £38.40/ha on fertiliser on the Trinity and put more foliar nitrogen on, compared to the Gallant,” he recalls. “But the extra yield more than compensated for that. The gross margin was £138/ha higher with Trinity.”

Since the farm, near West Wickham, is located in a nitrate-vulnerable zone (NVZ), Mr Norman is careful about sticking to the N-max limits. “An additional 20kg/ha of N over and above the 220kg/ha figure is allowed for every tonne more than 8t/ha, and of course milling wheat varieties can receive a further 40kg/ha. So we can go up to 320kg/ha, if need be.”