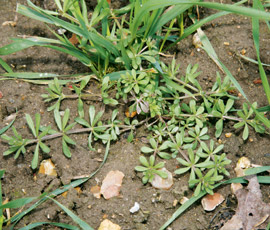 Cereal growers are being reminded to stick to the rules covering sulfonylurea when it comes to herbicide use this spring.

Where the newly approved Lexus (flupyrsulfuron)/Atlantis (iodosulfuron + mesosulfuron) sequence was applied last autumn, there are implications for spring herbicide choice and growers must adhere to the rules, says Agrii’s Chris Bean.

“Remember that the use of the sequence means that no subsequent ALS-inhibiting herbicides can be applied to that crop. So it limits your spring options.”

In that situation, the only active ingredients still at a grower’s disposal include fluroxypyr, HBN and the hormone materials, such as mecoprop. “Platform S (carfentrazone+mecoprop), if it’s still about, is another choice.”

However, it’s not just herbicide choices that are restricted, there could be timing issues, too, he points out. “That’s why the sequence was never really an option on fields where thistles, docks and polygonums were likely to need controlling, as they need a late application of a sulfonylurea.”

Likewise, growers who like to use amidosulfuron mixes in February and March to control cleavers, rather than leave it any later, were always unlikely to be tempted down the sequence route, he says.

Bill Barr made use of the Lexus/Atlantis sequence in some fields with bad blackgrass. “Where broad-leaved weeds aren’t a problem, we used Lexus in the pre-emergence stack, as it worked out well on cost. It was effective on cranesbill and volunteer oilseed rape, too.”

However, farms with weeds such as charlock and fool’s parsley, which need an SU application, had Defy (prosulfocarb) in the pre-emergence stack instead, he reveals, to avoid falling foul of sequencing rules.

Cleavers aren’t such a concern. “They get a good clobbering from Atlantis anyway. Straight fluroxypyr can be used on them in the spring, regardless of previous treatments.”