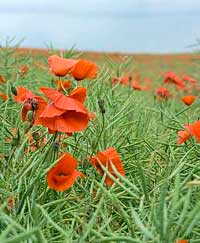 Loss of habitat and diseases are the key causes of honey bee deaths in the UK, the British Crop Production Council congress has been told.

Francis Ratnieks, the only professor of apiculture in the country, claimed that popular issues picked up in the media, such as pesticides and climate change, were distractions.

The Sussex University lecturer said, “My focus is on diseases and flowers. It is easy for the key issues to be submerged under the popular ones put forward by NGOs.”

There was no scientific evidence that correct use of pesticides had contributed to the decline in honeybee numbers, he said. “They are not a significant problem in the UK.”

Habitat destruction and loss of forage resources were an under-rated factor in honeybee survival, David Aston from the British Beekeepers’ Association agreed. “A colony needs around 30-50kg of pollen to survive,” he pointed out.

“Where have all the flowers gone?” asked Prof Ratnieks. “A healthy colony needs something to eat. Beekeepers can’t plant crops for bee food.”

The loss of heather moors and fewer clover leys had been partially offset by more oilseed rape in the rotation, but generally there were fewer flowers in the countryside, he said.

His department at Sussex University was hoping to raise £2m to research honeybee health. So far, donations worth £0.5m had allowed two of the four projects to begin, he said.

Project one was investigating breeding disease-resistant, hygienic honeybees, while project two was decoding honeybee “waggle dances” to pinpoint where bees were foraging during a year.