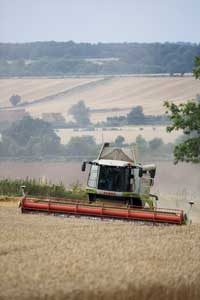 The barley harvest is virtually complete, except in coastal and higher-altitude areas. Quality seems good, with most specific weights above 64kg/hl. High yields are also reported, with the key Niedersachsen region 6% above 2008.

The German wheat harvest – the second biggest in the EU – is 25-35% complete and progressing well in the south thanks to favourable weather. There has been rain in the north-west, but crops are slightly later.

Wheat yields are unclear at the moment, but don’t look to be as impressive as barley. Protein content is reported slightly lower in some areas, while Hagberg and specific weights look normal. All German figures are supplied by German Grain Market Information: AMI.

In France, the EU’s biggest wheat producer, wheat harvest south of Lyon is virtually complete, but in the north-west progress is much slower with about half of the crop harvested.

Nationally, all the winter barley has been cut. Combines have also made big inroads into the spring crop – areas south of Lyon have finished and more than half has been gathered further north. Malting quality looks to be excellent.

Ukraine has been making good progress, with over 80% of its wheat area now cut. Yields continue to improve, averaging 3.07t/ha, well above the 2.5t/ha at the beginning of the campaign (UkrAgroConsult).

Predicted crop output is about 19.4m tonnes, 5m tonnes below last year, but well ahead of 2005-2007 averages. Meanwhile, drought in some Russian regions is reducing grain estimates and 70% of the crop is expected to make feed grade against 60% last year, says Interfax.

In Hungary, 92% of the wheat had been harvested, producing just over 4 m tonnes by 31 July, down 30% on 2008 due to dry conditions, according to the ministry. But quality looks favourable.

What it means for the UK

With the size and quality of EU barley crops, the UK is going to have to be aggressive with exports, given the size of domestic crop. Malting premiums throughout the EU are reacting to the continued good availability.

Germany remains a key source of high-quality milling wheat for the UK. However it is still too early to judge the quality, protein levels and impact of previous rainfall.