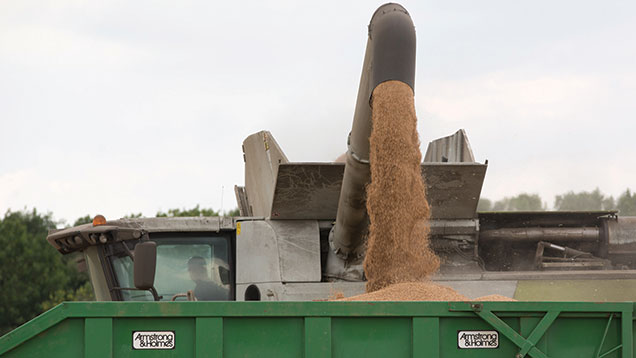 Some of the newer wheat varieties have delivered up to 7% more yield than controls in a British harvest that will be remembered for the yield world record being broken twice and very late ripening crops.

“Looking at the Recommended List data, winter wheat yields have been more than 1t/ha above the five-year mean, at 11.37t/ha,” says Niab Tag cereal specialist Clare Leaman. “In most areas, it has been a really good year.”

Bill Handley of AHDB’s Recommended List team is of the same view. “It is a very pleasing set of results. The all-trial 2015 mean of 11.37t/ha compares very well to the five-year figure of 10.34t/ha. Even second wheats have done well at more than 10t/ha.”

Both agree there haven’t been any big shocks with varieties. “Any that have underperformed are only slightly down against their five-year mean figure. There are no alarm bells ringing, but a few will be subject to more scrutiny.”

Growers should take a look at the untreated yield figures, as there have been some big variations, urges Clare Leaman.

“It can be difficult to explain untreated yield results,” she says. “In general, those with good disease resistance will produce higher yields. But it’s not always a straightforward relationship.”

“It’s a much smaller set of trials, so bear that in mind,” she says. “But it is the sort of information that growers should be paying more heed to.”

Group 1 Skyfall has lived up to its promise and ended the year slightly up on expectations, reports Mr Handley.

Skyfall has also made the bread-making specification for most growers, with protein contents hitting the target, says Mrs Leaman.

“It is early days, but it seems we may be seeing some influence of soil type with Skyfall. It has done better on some sites than others, so there is more to be learned about growing it. Interestingly, Niab Tag trials show Skyfall doing well as a continuous wheat.”

New Group 1 Trinity has also met expectations with a yield of 101%, keeping it on course, while established choice Crusoe has been consistent with both a 2015 and a five-year yield of 98%.

“The protein figures for the quality varieties are also in line with predictions,” she adds. “Crusoe and Cordiale are at the top, followed by Skyfall and Solstice.”

Of the current Group 2s, Lili produced the highest yield of 103%.

However, the 2015 performance of candidate variety Siskin has been very strong, making it one of the winners of the year, says Mrs Leaman. “It really stands out, with a yield of 107%, so it is the highest-yielding of all the varieties tested in 2015. It’s being evaluated by Nabim as a potential Group 2 wheat, which means it is coming up fast behind Lili.”

Newcomer Britannia is the pick of the Group 3 varieties, having produced yields that put it up with the Group 4 feed varieties.

Its 2015 yield of 105% is the same as that of Santiago, while a five-year mean of 104% is just 1% below the top performers. “It will be interesting to see if there is any additional lodging data to come on Britannia,” she says.

The other newly recommended Group 3, Conversion, had a slightly disappointing year, while existing choices, Monterey and Claire also came in just below expectations.

Reflection, which joined the Recommended List this year, has dismayed the commentators by coming in with a yield 3% below its five-year mean of 105%.

Its 2015 performance of 102% is a bit disappointing, acknowledges Mr Handley, especially as there is predicted to be quite a lot of seed going into the ground this autumn.

“It hasn’t bombed by any means,” he stresses. “But it had a poorer year in trials.”

Mrs Leaman believes Reflection has potential, but growers will be disappointed to see it dip. “If it had been an extreme year in terms of growing conditions, it would have been easier to explain.”

The other newly recommended hard feed wheat variety, Costello, fared better. “It did exactly what was expected of it with a yield of 103%.”

Mr Handley notes Costello has a balance of features, so its yield shouldn’t be considered in isolation. An untreated yield of 116% is a highlight, especially in the current year, he suggests (see “Untreated yields”, p40).

Otherwise, stalwarts Diego at 102% and Santiago at 105% again had good years. “They are consistent. Nobody will be let down by these two.”

Evolution is another which has held its ground with a yield of 104%, making it one of the frontrunners on yield over five years at 105%. However, its later maturity caught some growers out, says Mrs Leaman.

“Evolution was still sitting out there in the field when the rain came,” she reports. “That didn’t seem to do it any harm, but field operations on some farms were held up by it. Some growers hadn’t experienced this before.”

Relay also exceeded its five-year figure by 2%, coming in with 102%.

Of the candidate feed varieties, Silverstone has really impressed with a yield of 106% and lies in second place overall for yield, just 1% behind Siskin.

“Silverstone looks to be a very high-yielding Group 4 with a respectable set of disease ratings,” says Mr Handley.

But along with another high-yielding candidate Belgrade, more information on its lodging risk will be required, adds Mrs Leaman.

Unfortunately, Graham didn’t have the best year, she says, coming in 2% lower at 103% than its five-year average of 105%. “It’s still up there for yield and it has decent disease resistance. But the drop in yield wasn’t expected.”

It has been a good barley year with both winter and spring barley more than 1t/ha above the five-year mean.

“All barley has done well, whether it is for malting or feed, or produced by hybrid or conventional means,” he says.

As expected, the hybrids have had a good year, as they are now being grown in a way that suits them, without penalising the others.

“Volume has come in with a yield 2% above its five-year figure at 106%, while the candidates Bazooka and Belfry have looked promising, with Bazooka finishing at the top of the pile on 109%.”

Otherwise, the two-row feed varieties such as Infinity produced results in line with expectations, as did the malting type Talisman, says Niab Tag’s Clare Leaman.

Of the candidates, feed type Orwell and potential malting variety Shadow are still in the running.

“For Shadow, the future will be decided by its quality results. Its five-year figure means it remains competitive on yield.”

Spring barley yields have been most impressive, especially from trials based in the west of the country, says the AHDB’s Bill Handley.

“They have come out 1.3t/ha higher than the long-term average,” he points out.

It has been a good year for Planet, which has the top yield of 107% and provisional approval for brewing. “Everything is looking positive for the variety at this stage.”

Irina, which is fully approved for brewing, has also performed well at 105%, he adds.

While the dual-purpose types haven’t given yields quite as high, there are no obvious disappointments, with Odyssey at 103% performing close to its five-year mean. “Concerto is behind on 98%, but it is an older variety.”

Of the feed varieties, the highest-yielding were Scholar and Shada, both with 105%. “But it is interesting to note that they are a bit below Planet.”

Candidates Laureate and Ovation are looking competitive, says Mrs Leaman. “There aren’t as many candidates lining up for consideration later this year, but their performance is positive.”