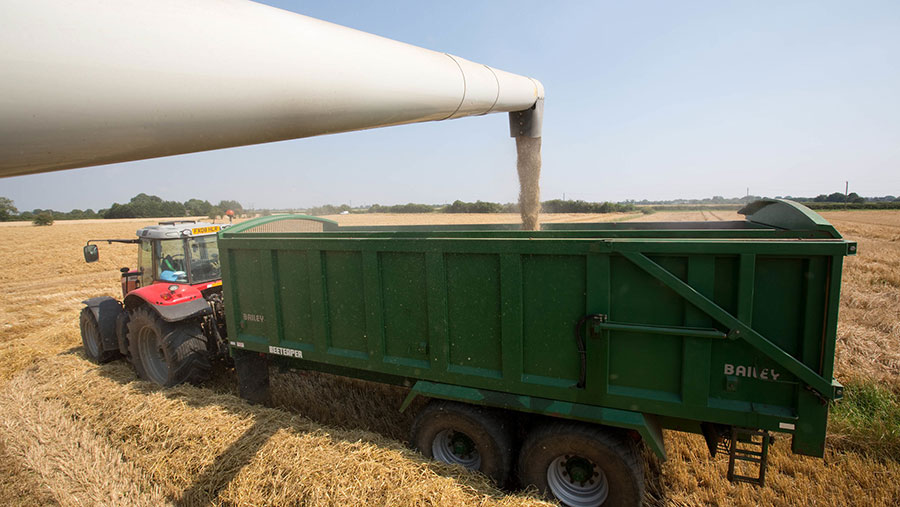 Harvest has made good progress after an early start in southern England, but mid-week rains have brought some areas to a standstill.

One Hampshire grower is already a quarter through his harvest at a time when in a more normal year, combines would have just started to roll.

In Kent, Martin Boulden had made a pleasing start to his winter wheat harvest at Court Lodge, Aldington, with yields coming in better than expected.

Mr Boulden had also cut his winter oats, which came in at 8t/ha and 15% moisture. “It has been very dry with us and we have missed the rains this week.”

Winter barley harvest was done and dusted for Anthony Carr near Godmanchester, Cambridgeshire. “I am not sure how it has gone so fast, but the quality is better than last year as that was a bit of a disaster.”

Mr Carr grew some Sunningdale six-row hybrid barley, which he thinks yielded 7.9t/ha. “It has all gone so easily, it was over before I knew it.

“The winter wheat will be ready as soon as the weather is. It is sunny and windy today (21 July) but we had an awful lot of rain yesterday,” said Mr Carr.

He has 101ha of winter wheat still to harvest, which should all be ready by the last week of July. “It looks much better than last year across the entire farm.”

In Hampshire, rain put an early harvest on hold for Andrew Hull. Farming near Fareham, Mr Hull’s crops were two weeks ahead of normal due to the prolonged dry spell in June.

“Luckily we had some rain just before things died off.”

Oilseed rape had all been harvested, with moisture contents coming it at an unprecedented low of 6%, he explained.

“It was almost too low for the reader.”

Yields were about average for the farm, at about 3.7t/ha.

Mr Hull had also started on his Cordiale wheat.

“The 24ha came in at 12% moisture and yielded 8.6t/ha in a second wheat slot. It’s not barn shattering, but around average and we are now waiting on quality,” he said.

“I am about a quarter of the way through harvest, which is a real surprise. But rains have put things on hold since Tuesday.”

In Wiltshire, oilseed rape harvest was wrapped up for James Stafford near Corsham, with very pleasing results. He had about 40-50ha of Barbados that came in at 4-4.5t/ha.

“It came off the field well but was almost too dry, at 6-6.1% moisture, but I am very pleased with the dry weather we had.”

Mr Stafford had about 16ha of winter barley left to cut, having cut 65ha so far at a yield of about 8.6t/ha, with specific weights at 64-65kg/hl.

Mr Stafford would then be straight into his 24ha of oats and then into his 60ha of winter wheat. “I am more than happy with how it has gone so far as normally we do not even start harvest until now.”

Harvest was imminent for Lionel Wells, near Banbury, but the looming wet weather had put the combine on hold.

“Everything looks fantastic and hopefully we will start next week, but we are just waiting for the rain to pass.”

Mr Wells had 30ha of Elgar and Cabernet oilseed rape, 60ha of Cocoon, Scout and Zulu Group 3 winter wheats, 40ha of winter beans and 12ha of spring barley to cut.

“The potential is there for it to go well as we have had the perfect weather so far.”

The first AHDB winter barley harvest results have been published with the overall mean of 10.07t/ha, well ahead of the five-year average of 9.65t/ha.

However, this is only based on two AHDB Recommended List trial sites, in Warwickshire and Hampshire.