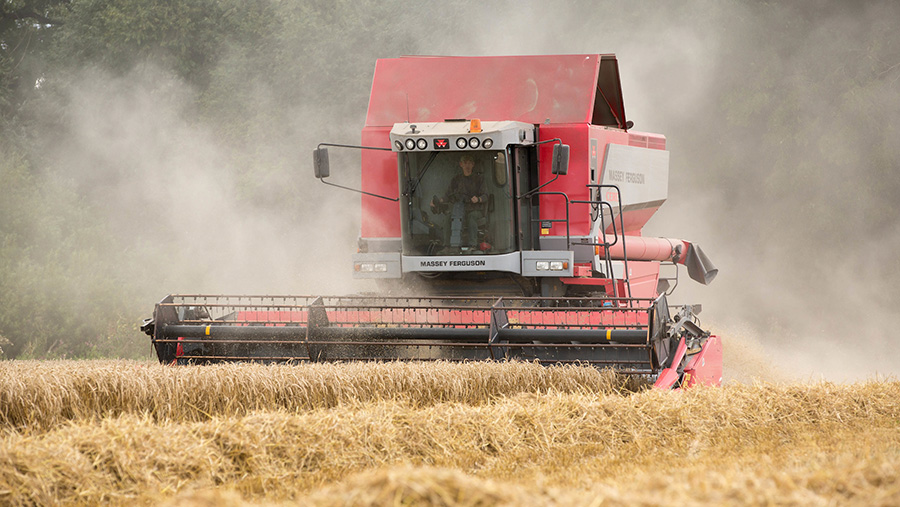 Harvest is in the final throes across northern England and Scotland, with winter wheat and spring barley almost wrapped up.

However, spring bean crops are still a few weeks off being ready to cut, with yields expected to be disappointing.

Harvest has been exceptional for David Pridgeon at Willow Farm, Skegness. “It’s been a vintage year,” he said.

“I’m on heavier land, which retained moisture and was always a bit cooler during the hot spells in June and July.”

He was just finishing off his spring wheat and spring barley on Friday (7 August), while most other people in the area have already finished. “Willow spring wheat was running well, but I’m not sure on the quality,” he said.

Winter wheat has done very well, but second wheats were quite variable. Bushel weights averaged 81-83kg/hl, while protein content was a bit low in Skyfall and Siskin, but his Crusoe made milling grade.

“Yields were between 10t/ha and 12t/ha, which is very good really,” he added.

Mr Pridgeon still has spring beans to cut, which are a few weeks off combining. “They looked a real picture until we had a storm in early April, which broke the top halves off,” he said.

Further north, harvest is almost wrapped up for Andrew Gloag at Busby House Farm, Stokesley. Everything is complete except for 24ha of spring beans, which are 10 days off being desiccated.

“They are short, with pods low to the ground, which might make combining a challenge, but they look well,” he said.

His 506ha of winter wheat was varied with the best crops yielding 10t/ha and the lowest down at 7.4t/ha. His heavy clay soils retained moisture during the drought, so there had not been such a marked effect on his crops as in other areas.

“I tried using biostimulants this year, which had a positive effect – they were used on the block that yielded 10t/ha,” he said.

Moving into Scotland, harvest is almost finished for Sandy Allison at Turnhouse Farm, near Edinburgh airport. “I’ve still got 26ha of winter wheat to cut and 24ha of spring barley,” he said.

Mr Allison is slightly disappointed that second wheat yields are down on average, but first wheats have done OK. His Motown and Zulu second wheats averaged around 7.4t/ha, while his first wheats ranged from 7.4t/ha to 9.9t/ha.

His Cordiale milling wheat yielded lower than normal, but has the required quality. “The protein was high as the yield was down, around 13.5-13.6%, so it went to the millers with full specification.”

Spring barley has done alright, averaging an estimated 7.4t/ha. “It’s been fine and the quality is good with no issues at all – good nitrogen at 1.48-1.52% and no skinnings,” he said.

His spring beans are still two to three weeks off being ready and he is uncertain how they will perform. “They are much shorter than normal, but the pods seem to be there.”

In Angus, yields are down around 20% on average for James Porter at West Scryne Farm, Carnoustie. “We had one field of wheat that was sown early, that just about made 9.9t/ha, but most was under 8.6t/ha,” he said.

Spring barley yields have also suffered due to crops being on quite light land near the sea. Mr Porter’s 97ha of Scholar and Laureate ranged from 5.7t/ha to 7.4t/ha and averaged 6.7t/ha, when he would normally expect to get around 8.2t/ha.

“We were definitely earlier with the cereals this year – about 10 days,” he said.

“I just have one field of spring barley to finish combining, which is slightly inland from the others, so I think it should have a good yield.”