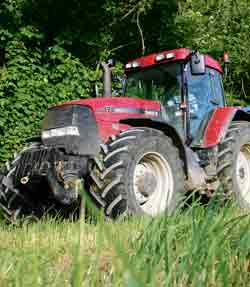 There’s no doubt about it, contractors do a pretty impressive job when it comes to harvesting. When their giant, gleaming machines get going they quickly swallow up the acres.

But that also presents a problem. High work-rates mean there are monstrous tonnages of grain being turned out every hour and many small farm stores just can’t handle it.

However, a few simple things can be done to ease the process. After all, it’s in everyone’s interest to get crops cut as quickly as possible. Farmers can breathe a sigh of relief when their corn is in the store and contractors can get on to their next customer.

Whether it’s cutting back trees or prepping the trailer fleet, if you want to avoid those all-too-regular Basil Fawlty-esque moments of mid-harvest stress, it’s worth getting things in order before things really kick off.

Dorset contractor and National Association of Agricultural Contractors chairman, Mike Simpson and business partner Jim Farqharson give some tips and tricks on how best to speed the job along.

Getting in and out of fields and back to the store is a serious issue for combines, trailers and straw-lorries. Ideally, hedges need to be hacked right back to aid visibility and gateways widened wherever possible.

“And bear in mind that there needs to be room on the opposite side of lanes for combine tail-swing.”

Another big time-saver is avoiding header changes. If fences need to be taken down between fields and hedges cut low enough so the combine driver can either lift the header over or squeeze through a gap.

“By the time you’ve swapped a grain trailer for the header trolley, unhitched, moved and coupled everything back up, you’re looking at a minimum of 20 minutes’ work,” says Mr Simpson.

“If you only have three field moves in one day, that equates to an hour’s worth of combining you’ve lost.”

Another area which will make a big difference is the state of farm tracks. A morning spent filling potholes will not only help speed grain trailers on their way, but will limit the number of punctures and the amount of spilt grain.

When a combine swallows something it shouldn’t, things can quickly go badly wrong and the inevitable downtime can lead to more harvest-time headaches.

“Sprayer and spreader drivers should be constantly on the lookout for fallen branches and other debris,” says Mr Simpson.

“Not only that, they need to keep their eyes peeled for over-hanging boughs. Just because a tractor can make it through, it doesn’t mean the combine or straw-lorries will come through unscathed. Machines tend to have more and more expensive kit perched on the roof now. GPS receivers, Xenon lights, electric mirrors are all in the firing line and need to be thought about.”

Spraying off a strip round each headland can have a big impact on harvester output as well as helping to limit weed encroachment. Inevitably, the outside run will be slowest, but knots of cleavers and other weeds can really make it drag.

Consider spraying off whole fields. It costs little to apply 1.5-litres/ha of glyphosate and it can knock 2% moisture out of a crop, potentially leading to more even ripening and certainly lower drying costs.

If the farm is supplying fuel, then it’s worth bearing in mind that most modern kit doesn’t tolerate dirt and debris like older machines will. Big combines will comfortably use 800 litres a day, so have enough in stock that the pump doesn’t end up sucking up the dregs from the bottom of the bowser.

If the farm is responsible for hauling grain off the field make sure trailer capacity matches the combine.

“Some of these big combines can carry 11t in the tank and will cut another three while they’re unloading, so they fill a 14-tonner in one go,” says Mr Simpson.

“The tractors need to be capable of getting to the store and back without struggling. You’ll have a tonne less in the store for every minute the combine is kept waiting.”

Consider having a spare trailer parked on the field headland to act as an emergency buffer bin should something go wrong with the haulage team or back at the store. Make sure there is a full set of spare wheels for the trailer fleet and that jacks, blocks and wheel-braces are to hand.

“Storage can be the biggest headache for contractors. Often grain handling kit hasn’t been upgraded for 20-30 years and ends up being a real bottleneck,” says Mr Farqharson.”Twenty years ago a John Deere 1188 would cut 15t/hour whereas now a Lexion 600 can churn out up to 75t/hour.”

Short of putting up new high-capacity stores, what can farms do to squeeze extra capacity from what is already in place? “Having on-floor dump areas can make a big difference.

“But there also needs to be a member of farm staff on hand all the time to push up and operate the grain store controls so that trailer drivers can get back to the field as quickly as possible.”

Prior to harvest get conveyors, elevators and belts serviced and make sure stores are cleaned well in advance to make the most of pest control opportunities.

“We offer a contract cleaning service to take the hassle out of the job for the farmer,” says Mr Farqharson.

“You need to leave an interval between cleaning and fumigating and harvest; 3-4 weeks is the minimum for effective insect control, but longer is better.”

In and around the yard ensure all floodlights are working and that unnecessary clutter is cleared out of the way to make trailer turnaround times as brisk as possible. Point out low cables to trailer drivers and consider re-routing if possible.

“Combine drivers need to remember they are mowing for the baler,” says Mr Simpson.

“One of my bugbears is where combine drivers reverse up in a hurry and leave a big lump or when they get to the end of a run and just ram the hydro lever forward before swinging round. It makes it impossible to bale and leaves the headlands in a right mess.”

If the straw has been rained on and needs raking, don’t run the tines too low, as this will often dredge up more wet from below.

Contractors and farmers need to work together to keep their neighbours happy.

It’s worth notifying houses bordering fields if the combine is likely to be running late into the night and let the combine and trailer-drivers know if there are individuals that are especially sensitive.

“It’s worth planning how you cut so that you try to get areas done close to houses when people might be out at work,” says Mr Farquharson. “And if people are interested, it’s always worth taking a few seconds to explain what you’re doing. It’s an easy way to get the public on side and avoid any aggro.”