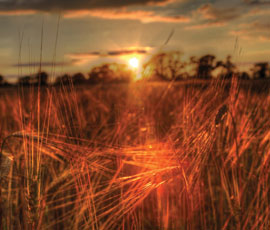 Heavy downpours continue to disrupt harvest and fieldwork efforts, although a better forecast could enable work to resume over the weekend.

According to the latest ADAS report, farmers had less than 5% of their crops left to harvest across the UK by Tuesday (25 September).

However, in Scotland there was still 40% of the wheat and 20% of the spring barley to cut, alongside oats and other break crops.

And this week’s heavy rain was making life difficult for farmers across much of the country.

In Yorkshire, fields had flooded at Holme House, Holme on Spalding Moor, but at least Catherine Thompson had finished harvest.

“I drilled some winter barley on Saturday and now it’s flooded – the only reason we drilled that field is because we couldn’t travel on the fields it was meant to go into,” she said.

“We’re on heavy clay here and it’s far too wet to plough now – I don’t know what I’m going to do.”

Further south, Philip Gorringe still had grass seed and wheat to cut at Blakemere Farm, Blakemere, Herefordshire, but was confident that quality would still be usable.

“We’re just about under water here,” he said. “We had three inches of rain at the beginning of the week. But the crops are still viable for seed, if I can get at them.”

In Northern Ireland, Gerald Erwin was pleased to have finished harvest at Nutts Corner, Crumlin, County Antrim, but said there were still 10-15% of crops to cut in the area.

Many farmers were either moving into, or already well through potato harvest – and yields were disappointing across the EU, said a report by the Potato Council.

Production in the five leading countries was likely to be 14.5% down on last season, with reduced plantings and a yield drop contributing to the drop.

“Extreme weather conditions have been commonplace, with variable yields, sizes, quality and availability among the resulting key concerns experienced this year.”